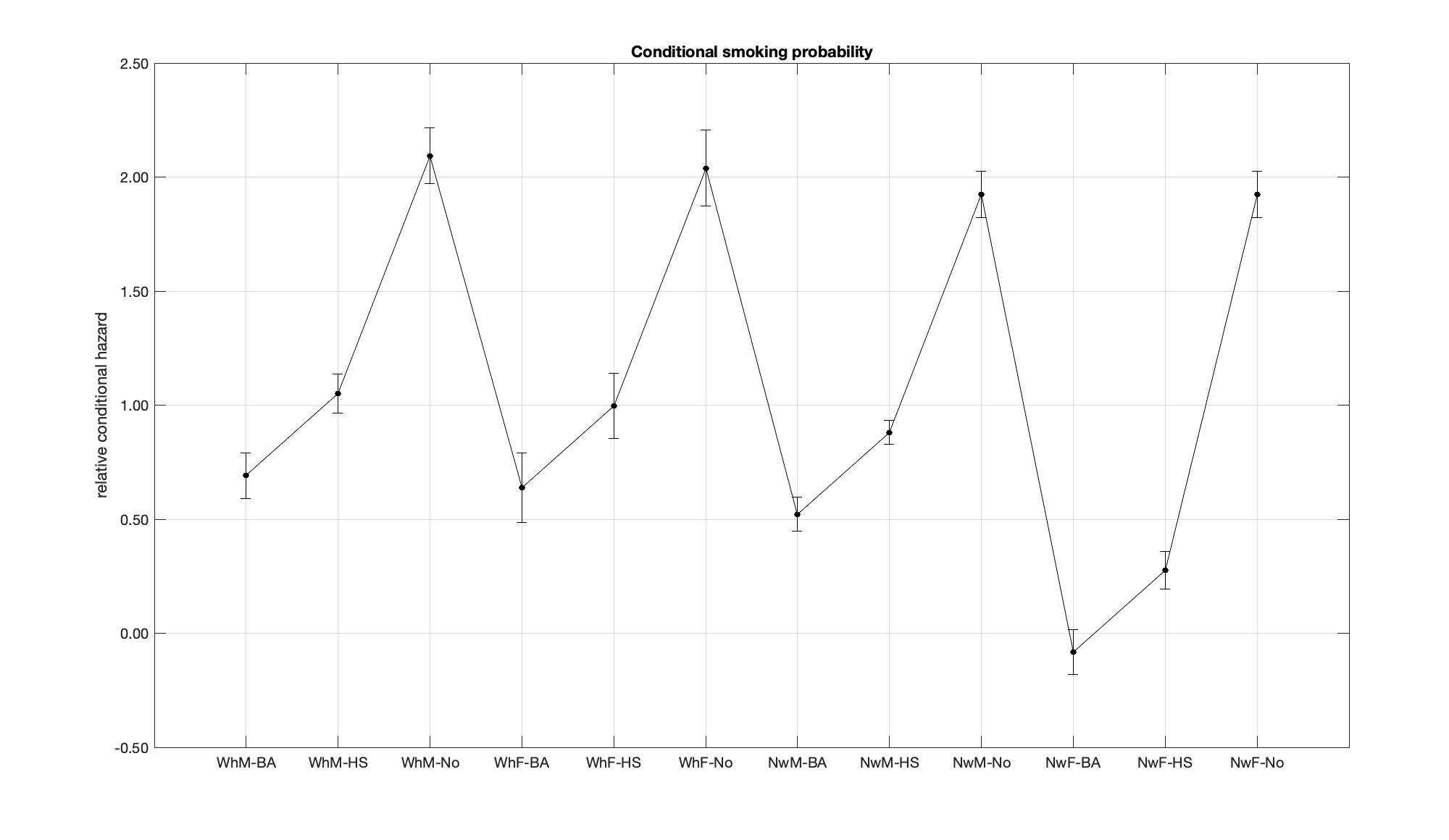 Smoking cigarettes is an even stronger predictor of ever getting arrested than smoking weed or using hard drugs. Only dealing marijuana comes with a higher risk of arrest. Why is that?

A large part of the answer is that smoking contains a very strong class signal. We can isolate this signal looking at the predictors of smoking. A cool way of doing that is to carry out a logistic regression with only Boolean or dummy variables. We can call it the smokers’ regression. The response is whether you smoke. The predictors are race, class and sex dummies. Basically, all we want to do is calculate the relative effect of various categorical conditioners. If we choose the dummies carefully, you can obtain conditional hazard rate for all sub-populations.

This graph is a bit complicated but too cool to pass over. The four triplets are four combinations of male/female and white/nonwhite, with the triplets corresponding to educational class: BA/HS/No. For those with at least a high school diploma, only nonwhite females stand out for their lower hazard rate. Conditional on education class, everyone else pretty much smokes at the same level. What is striking about this graph is that, without exception, we find the same gradient by class. Men or women, white or nonwhite, the underclass smokes as if it were 1952. Those who have a high school diploma but no college degree smoke at considerably lower rates. This is the middling half of America that we can identify as the working-class proper. College-educated elites smoke at lower rates still, regardless of race and sex.

So the class signal in smoking is very clean. It is also anecdotally familiar. I know professional middle-class people who hardly know anyone who smokes. At the other end, closer to the precarious edge, where the underclass lives, everyone smokes. The working class is closer to the professional middle-class than the underclass. But the class gradient is robust.

In particular, smoking is a risk factor for arrest even after we control for class. This is yet another way in which discourse proves stronger than reality. Not only is the underclass criminalized as a whole, anything that even suggests lower class is automatically criminalized. Anti-smoking in the professional middle-class discourse can be thought of as class work. That is, boundary work against the lower classes.