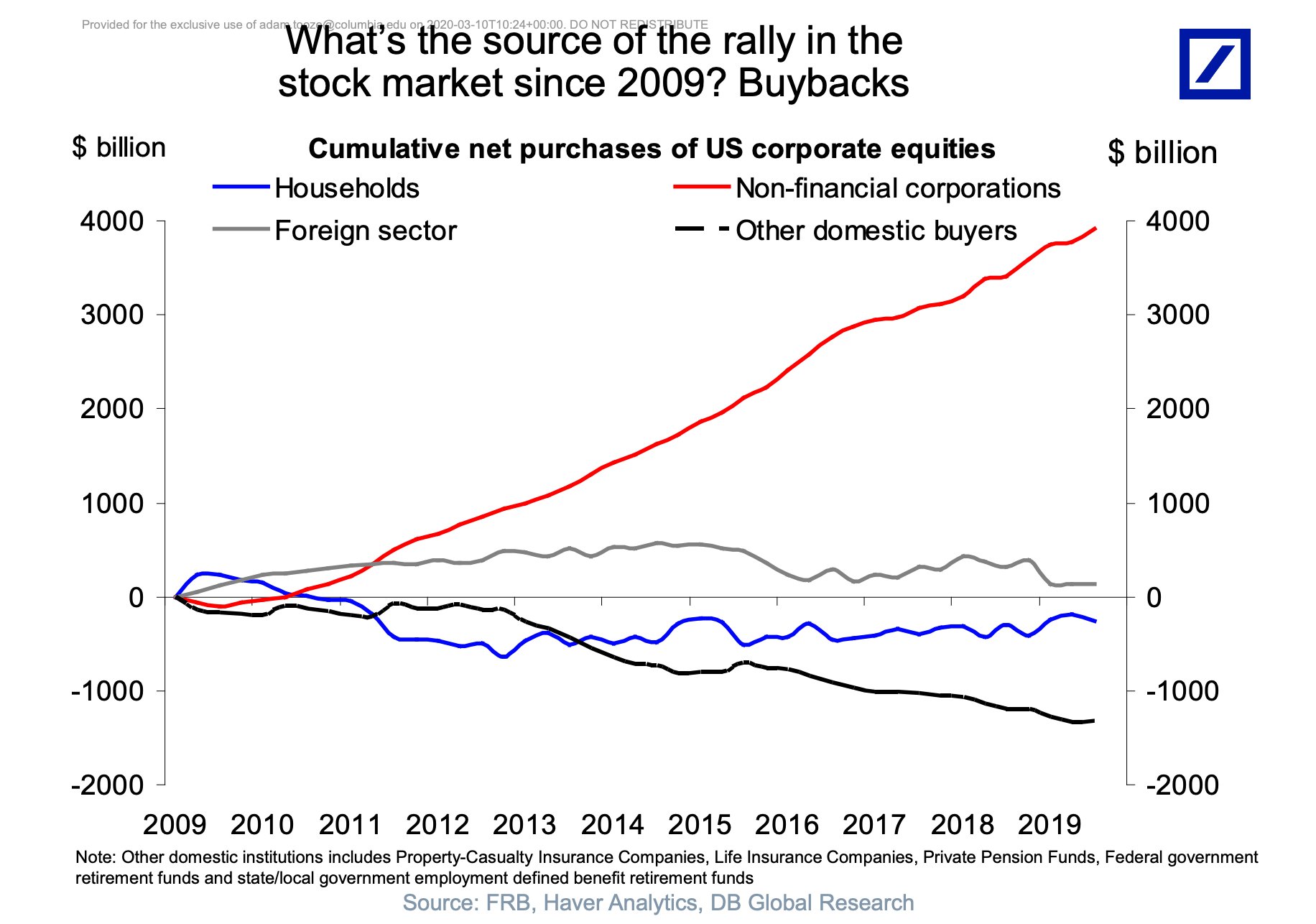 More recently, I found out from a friend on Facebook that David Kostin, Goldman’s chief equity strategist, shared the view. Kostin says that ‘buybacks have represented the single largest source of US equity demand in each of the last several years, and we believe higher volatility and lower equity valuations are among the likely consequences of reduced buybacks.’ These interpretations are based on a conflation of economics and accounting.

Share buybacks have indeed been so prevalent that net equity issuance has been negative since 2003. So, buybacks have been driving stock valuations. The question is whether that is a parlor trick or otherwise. 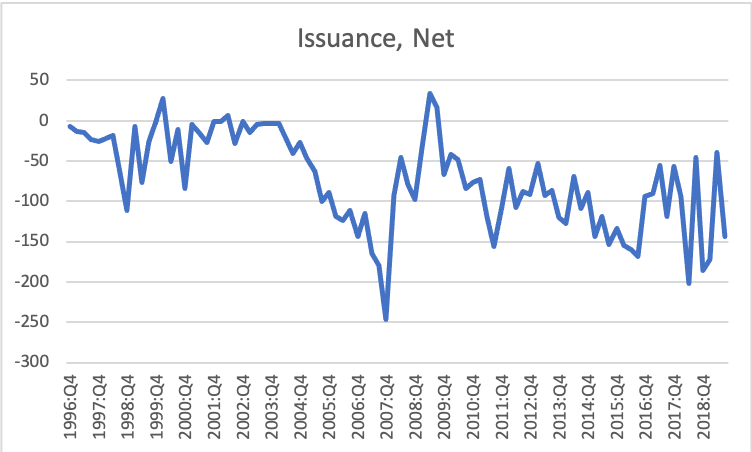 Buybacks are an alternative to dividends as a technique of transferring surplus earnings to shareholders. They have become increasingly prevalent because of tax advantages – dividends are treated as income on which you pay your 30-40 percent marginal rate; equity gains are treated as capital gains only when you liquidate your investment and on which you pay 15 percent. But whether the firm announces buybacks or dividends, only actual economic surplus is disbursed to shareholders. This means that, at the macro level, whether the stock market is up because of buybacks or higher dividends, it is still a sign of corporate health.

Subject to fluctuations in the valuation cycle, that is to say, subject to time-varying risk aversion, the future of the US stock market will reflect the economic standing of US firms irrespective of whether or not firms continue to choose buybacks over dividends. They are likely to choose buybacks as long as present tax laws remain on the books.

There is, of course, the problem of moral hazard. Firms may prop up their own shares through buybacks even when their economic surplus is lower. This may boost the value of their stocks in the short term; with attendant rewards for executives whose compensation is tied to the stock’s performance. But such a strategy cannot be sustained for very long at all. Sooner or later, persistently poor economic performance would make such parlor tricks impossible. Nevertheless, such pumping schemes are ripe for insider exploitation, erode investor and public confidence in our economic institutions, and should be carefully monitored. That’s the responsibility of the SEC and the Justice Department. In as much as they affect overall stock market valuations, they are second-order correction terms that can be ignored by patient investors.

Parenthetically, nimble trading firms may want to track such shenanigans closely to harvest the premium associated with these anomalies. But we are here talking about zeroth-order or first-order approximations of overall stock market valuation.

Are stock market valuations likely to be lower or higher in the exit from the present crisis? That depends overwhelmingly on three factors: (1) How strongly the earnings of US firms recover; a function of economic growth and the relative bargaining power of capital and labor. (2) The monetary strategy of the US Federal Reserve; a function of both economic growth and the future path of inflation. (3) Time-variation in the market-wide risk aversion; a function of the risk appetite of market-based intermediaries, above all, US securities broker-dealers.

The baseline scenario is that recovery from the present recession will be robust, so that corporate earnings will recover strongly. At the same time, the global shortage of safe assets is likely to persist and inflation (since it has been driven by global overcapacity) will remain subdued, so that rates will remain low and monetary policy accomodative for the foreseeable future. Finally, risk appetite is likely to resume the pattern we have seen in the postcrisis era of financial repression. That is, we will continue to see risk on-risk off cycles, at least until the regulatory shackles on dealer banks are removed (in which case, we may return to the precrisis risk on-risk on cycle, ha). What that means is that the tidal whipsaw of the global financial cycle is here to stay, again for the foreseeable future.

There is, of course, the possibility of a structural break in economic growth, corporate earnings, global capacity and inflation, monetary policy, or risk appetite. But none of these can be forecasted with any confidence. Anyone who tells you otherwise is lying to you.

Postscript. The Modigliani-Miller Theorem states that the fundamental valuation (equivalently, in an efficient market, the market valuation) of a firm is unaffected by its capital ratio. Violations of the theorem are routine due to the coupling of valuation cycles with financial cycles. In a financial boom, debt is cheap and plentiful, firms take too much debt, ie their debt ratios get too high. At the same time, valuations are too high across the board and particularly for highly indebted firms because credit spreads are compressed in a financial boom. It all comes to grief when the coupled valuation-financial cycle turns, leading to unexpectedly high credit defaults and a market correction that ends the mispricing. On Facebook (send me a friend request) there was a discussion on whether violations of the Modigliani-Miller theorem invalidate my argument. Actually, my argument does not assume the Modigliani-Miller Theorem; it merely assumes that shareholders should be indifferent between debt-financed dividends and debt-financed buybacks.

It is quite true that ultra low rates and compressed risk spreads have made piling on debt quite attractive over the past decade. It’s also the case that that firms have been issuing more debt than before and buying back more of their own shares. But it is not clear if that is suboptimal from the shareholder’s perspective. As a shareholder, do you want your firm to piously maintain high capital ratios like a Swabian housewife? Not necessarily right? Roughly speaking, for any given level of the credit risk curve, there is some optimal capital ratio where the marginal benefit of higher leverage exactly equals the marginal benefit of a higher probability of survival in a black swan recession. In practice, it is not at all clear what said optimal capital ratio is, for individual firms, for industries, or even for the market as a whole. That is precisely why valuation-financial cycles persist for so long!

But none of this affects the logic of what I am saying in the least because there is no reason to believe that debt-financed buybacks are worse for the shareholder than debt-financed dividends. There is a case to be made that valuations were too high and unlikely to return to that level because of unsustainable debt-ratios. But then you have a problem with firms’ overall debt ratios, not whether they prefer buybacks or dividends. Same goes for the future valuations that the GS chief equity strategist is talking about. As far as forecasting valuations in the exit from the present crisis is concerned, the real issue is not whether buybacks will decline and thus drag down valuations, but whether firms’ earnings will decline and thus drag down valuations irrespective of whether firms announce dividends or buybacks.

All of the above amounts to an argument for the separability of the formal mechanism of disgorging firms’ surpluses to shareholders on the one hand, from questions regarding their economic prospects and the sustainability or optimality of their capital ratios on the other. The bottom line is that it is simply wrongheaded to think that buybacks per se were responsible for the stock market boom, and its equally fallacious corollary, that the decline of buybacks per se will lead to lower valuations in the future. It does not matter that buybacks drove the market rally of the past few years.