In the previous dispatch, I showed that working class people exhibit no more nativism than members of the hegemonic class. They do, however, overreport their enthusiasm for protecting American culture from foreign influence; while the latter tend to underreport the same. The opposite signs of the reporting bias for the two classes have to do with differences in notions of social desirability in their respective reference groups. Put simply, not being read into Boasian antiracism, members of the working class are afraid of being thought of as insufficiently patriotic; while members of the hegemonic class are afraid of being suspected of racism.

That was great fun. But nativism is merely a proxy for the real deal. Since then I have been hunting for data on racism proper. Specifically, I have been looking for what are called ‘list experiments’ that allow us to back out implicit positions on sensitive questions from survey respondents. It took the whole day but I hit pay dirt alright.

Ann Morning, Michèle Lamont’s advisee and now a sociologist at NYU, has done pioneering work on the recency of Boasian antiracism within the academy. She discovered that, contrary to perceptions within the humanities, biological scientists (including doctors) continued to reject the notion of race as a social construct until quite recently. Indeed, as recently as the mid-2000s, a majority of professors in the biological sciences believed that Homo sapiens had allopatric subspecies or continental races. It was no coincidence that the American Association of Physical Anthropologists voted to rename itself the American Association of Biological Anthropologists only last year. The hegemony of Boasian antiracism, even in the Ivory Tower, is much more recent than we imagine.

In 2004, Morning and her coauthors had persuaded Time-sharing Experiments in the Social Sciences (TESS) to add a list experiment to their omnibus survey. The idea of a list experiment is that respondents are divided into a control group and treatment group. Both are asked to report on how many of a given set of statements, without revealing which ones, they agree with. The trick is that the control group is given all the statements except the sensitive one that the researcher is interested in; while the sensitive statement is included in the battery given to the treatment group. The difference-in-means in the number of affirmative answers between the treatment group and control group then captures the proportion of a target population that implicitly agrees with the sensitive statement. One can also compare it to the proportion that responds in the affirmative when the question is posed explicitly (in a different sample), and thus compute the reporting bias. The reporting bias gives us a handle on the direction and weight of the ideology of the population being sampled. It is important to compute the standard errors correctly — the standard error of the difference of means is the square root of the sum of the squared standard errors of the means.

The sensitive question in the TESS survey was whether they agreed with the following statement.

This question is of profound importance; for it goes to the heart of biological reductionism that Boasian antiracism has fought since its birth. Recall that high racialism mobilized an imagined natural hierarchy of the races to explain world order (including the social order) in one fell swoop. It was precisely because it was performing this explanatory work that it enjoyed the grip that it did on the minds of western elites through the twentieth century. 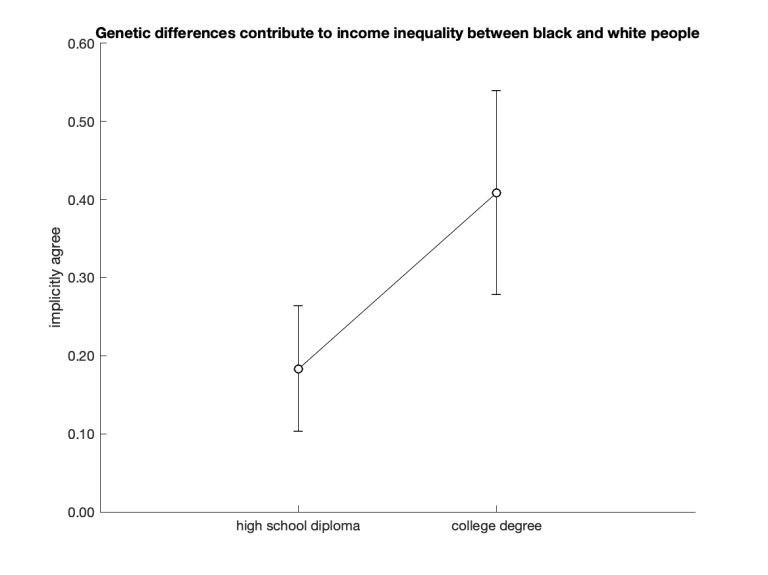 We find an astounding 22.6 percent gap between the share of college-educated whites (40.9 percent) and high school-educated whites (18.3 percent) that implicitly agree with the statement. The hegemonic class is more than twice as likely as the white working class to think that biological differences between the races explain the racial order in America. (Although they made different choices, Morning and her coauthors found a similar gap between education classes.) This is as close as it gets to a smoking gun in social science. Who is the racist now? 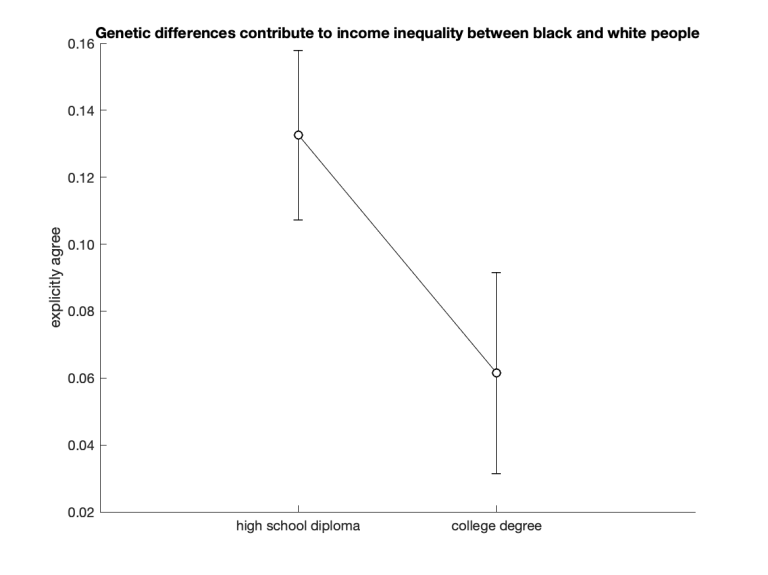 The underreporting bias is a statistically insignificant 5.1 percent for working class whites, but an astounding 34.7 percent for college-educated whites. The reporting bias of the hegemonic class is so extreme that it reverses the gap between the classes. Even though college-educated whites are dramatically more racist than the working class, they know that they must hide the fact. This explains why surveys with gotcha questions repeatedly find working class whites to be more racist. Table 1 reports our exact estimates.

These astonishing results should utterly shake your confidence in the notion that working class whites are obviously more racist than middle class whites. The evidence could not be more unequivocal if it tried.