There is a problem with workhorse linear regression models. The problem is that the relationship between the response and the conditioners may not be linear, or even linearizable. This is not that big an issue when the true relationship is at least monotonic. When it is not, it is easy to get spurious results. In fact, unless the pattern is completely random, when we regress a response on a bunch of conditioners, we are bound to find significant relationships where none exist due to sheer randomness — overfitting is the bane of econometrics. Moreover, while we may be able to visualize one-on-one relationships via scatter plots, that becomes less and less feasible as we add more and more conditioners to our model. We can’t check all the conditional relationships. And so some of the slopes we find significant may be an artifact of our choice of conditioners. Whether or not we should control for particular sets of variables depends on the underlying causal diagram that we are trying to uncover in the first place.

The machine learning approach is to resort to robust estimation techniques and/or out-of-sample cross-validation. There is great merit to these approaches, but they too have their limitations. They work better when one is trying to isolate a pattern that exists out there irrespective of the sample data. For then it makes sense to divvy up the data into training and testing subsets and check whether a model trained on the training subset works out-of-sample in the testing subset. But this may not always be advisable or suitable. In particular, it is unsuitable in forensic work.

Take the question that we have asked again and again — why did Trump win? Working with data at the county level, do we want train our model of the Trump swing on a random selection of say 2000 counties and see how it performs in the 1000 or so counties left out? I am not persuaded that that is a good idea. For there is no guarantee that a random selection of two-thirds of US counties is representative of the country as a whole. We want to know who put this guy in the Oval and why did they choose to do so. We can’t do that by pretending that counties are interchangeable and drawn from the same distribution. More generally, whenever we are interested not in uncovering a pattern that holds in general, but getting to the bottom of a specific historical instance, cross-validation makes little sense.

That brings us to non-parametric alternatives that may help us identify the underlying causal diagram. In what follows, we revisit the perennial question with a completely different weapon in hand. Here’s what we are going to do: For any candidate conditioner, say, overdose death rate, we will divvy up the counties by discretizing the conditioner into quintiles (5 equal parts), and then test whether the means of the Trump swing differ across these buckets. Specifically, we will test whether the means of the bottom two and top two quintiles differ from the middle quintile. We use a multiple comparison test based on the Kruskal–Wallis test by ranks — recall that rank-based methods are relatively robust to outliers. This is a much more robust way of isolating the underlying gradients than linear regressions or machine learning techniques. The reason is that we are making absolutely minimal assumptions about the data generating process. While this approach may not allow us to identify the underlying causal structure completely — in particular, it leaves us clueless to the conditional relationships — the results we do find will be robust, quantifiable, visualizable, and easy-to-interpret. Moreover, we shall use the 1 percent level of significance to be extra sure that our results aren’t spurious. So much for methodology. Let’s get on with the analysis. All data below is from Social Explorer.

Table 1 displays the main results. Each row contains the means of the Trump swing (Trump vote share less Romney’s vote share by county) conditional on feature quintile. For instance, the first row shows that the bottom 20 percent of counties by college graduation rate swung to Trump by 6.4 percent, the second quintile swung to Trump by 5.8 percent — both of which were significantly greater than the 4.9 percent swing to Trump in the reference quintile (Q3). Meanwhile, the penultimate quintile of counties by college graduation rate did not swing significantly to Trump more than the reference quintile, but the top quintile swung significantly away from Trump by 1.8 percent.

Just to be extra confident in these results we exclude outliers and rerun the algorithm. Table 2 displays the results.

The next figure displays the mean ranks of the counties by Trump swing conditional on quintiles of percentage of population sporting only a high school diploma. We can see that there is a very strong relationship between the mean ranks by Trump swing and the proportion of the populace that is working class. The means in red are significantly different from the reference quintile in blue. 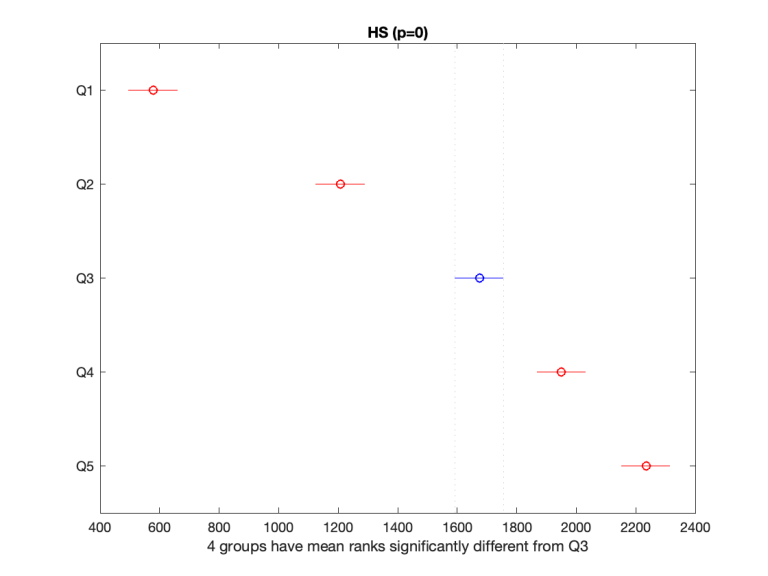 Indeed, this single feature explains 47 percent of the variation in the Trump swing in the cross-section of US counties. The gradient is so large that counter-factually increasing the percent of the populace with only a high school diploma by one standard deviation unit yields an additional +3.4 percent swing to Trump. The standardized gradients for other significant conditioners are displayed in the next figure. They must be taken with a pinch of salt because of the factors discussed above. 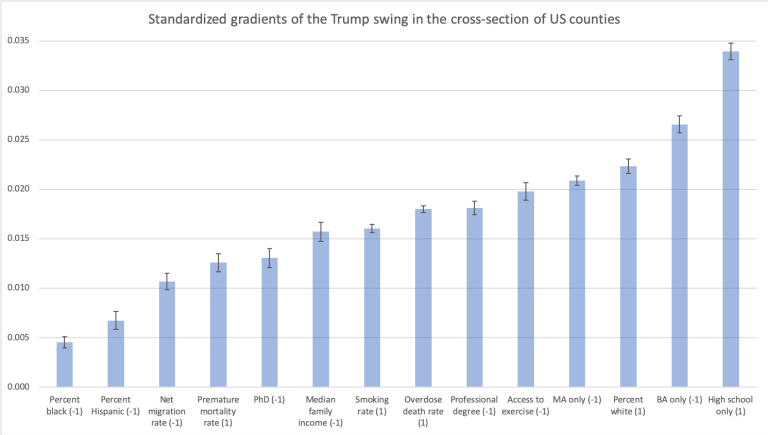 The results displayed in the two tables above are much more reliable that the gradients displayed. The next set of figures graphs the conditional means. Where the relationship is monotonic we can be much more confident of the gradients. This is only true of the six features isolated above.

The left has been just as much in the grip of economism as neoliberal economists. As I plow through the literature on the white working class, I am finding again and again that this is the fundamental limiting factor. For all the hoopla about the cultural turn, we have failed to update our discourse and strategies to reflect the primacy of culture. For instance, the left has expected workers, assumed to be alienated from their work under capitalism, to unite around their shared interest against the owners of capital since at least 1848. With no sign of that, generations of leftists have effectively blamed the working class for sporting a false consciousness. But workers are not alienated from their work (Crawford 2009, Torlina 2011). To the contrary, blue-collar work, hard manual labor, is central to the meaning-making of the working class (Lamont 2000, Jensen 2012). Even most cultural sociologists have ignored this enduring reality. Torlina puts it best in Working Class: Challenging Myths About Blue-collar Labor:

Rather than the depictions of subservience, alienation, and meaninglessness that describe blue-collar work in social science textbooks, it became clear that these workers were proud of their trades and their products. They felt important in their skills and their efforts, and many of them regarded manual labor as the essential ingredient to an honorable and meaningful life.

Fast forward to post-GFC diagnoses. The entire left-progressive discourse amounts to an all-in bet on political mobilization around inequality. But vertical polarization in income and wealth per se just does not have same valence in the working class as it does among progressive social and cultural elites like us. The breakdown of elite-mass relations and the attendant rage of the white working class is only conditioned by the material reality of vertical polarization — it is instead driven primarily by the concentration of symbolic production in the hands of the cultural elite and their favored cities and college towns (Brooks 2001) and the attendant cultural desertification of the rest of the country (Lind 2020). The symbolic annihilation of the working class (Gerbner and Gross 1976, Butsch 2017) is exacerbated by the classism of our class — evident in both the self-congratulation of Boasian antiracism (Farooqui 2019) and the everyday ‘hidden injuries of class’ (Sennett and Cobb 1993, Jensen 2012, Williams 2017).

Many scholars to our right seem to be paying more attention to the importance of keeping both balls — economics and culture — in the air at the same time (Murray 2013, Cherlin 2014, Lind 2020). Although otherwise quite impressive, I do not believe that any of them have fully diagnosed the breakdown of elite-mass relations either. This task is not optional. Restoration of elite-mass relations in the West in general, and the United States in particular, is a prerequisite for a solution to the planetary impasse. For a stable sociopolitical alignment of forces is necessary to see through the energy transition. And the only actor capable of remaking the world is a resurgent social democracy anchored on a progressive-working class alliance. How to bring that about is the central challenge we face. All else is secondary.

The progressive achievements since the 1970s that have brought race and gender relations to the center of the discourse have now become obstacles in the only path out of the planetary impasse. This is because the cultural elite have come to be overwhelmingly dominated by professional antiracists whose principal job seems to be boundary work against the allegedly racist working class. But this policing is absolutely antithetical to any possibility of a progressive-working class alliance. That’s our real problem. And it is not going to go away even if Sanders wins the White House.

Postscript. The ANOVA tests are easier to visualize and interpret. The error bars display standard errors of the conditional means. Again, the only monotonic relationships that we can be certain about are (1) percent of county population with only a high school diploma, (2) percent of the populace with a doctorate, (3) percent of the populace that is white, (4) percent of the populace that is Hispanic, (5) access to exercise, and (6) overdose death rate. The import couldn’t be clearer. Trump is a symptom of the revolt of the white working class. Large parts of the country are in serious trouble. But the rage of the white working class has as much to do with class oppression disguised as Boasian self-congratulation as the decline of situated communities.

6 thoughts on “The Trump Swing Revisited”