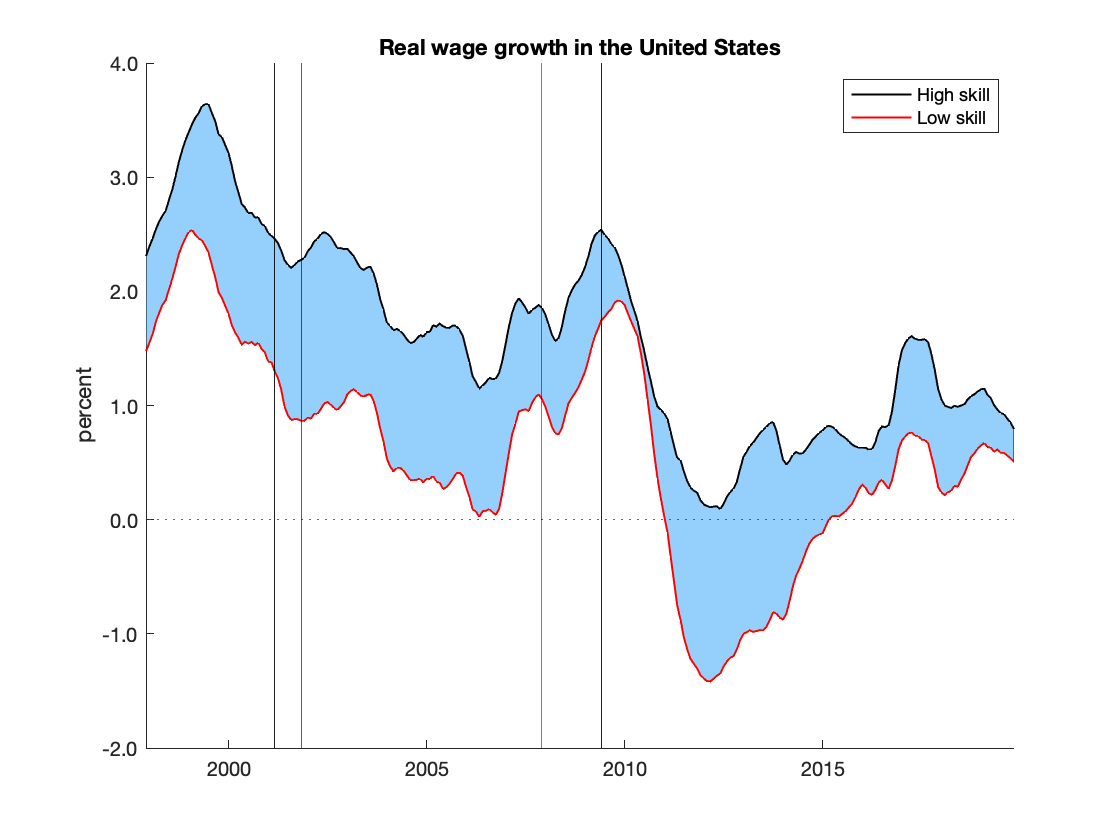 The main difficulty in pinning down real wage growth is pinning down the appropriate adjustment for inflation. In principle, one should use consumer price inflation. But this series is very volatile, with the result that the signal-to-noise ratio is low. The best solution is to use a slow-moving index that captures underlying inflation. The best proxy for this unobservable known to the Policy Tensor is the sticky price index published by the Atlanta Fed. In what follows, we shall use that index to extract real wage growth rates for various categories from nominal data. All data below is from the Atlanta Fed.

As noted previously, wage growth has not been biased by race. If anything, in 2017 and 2019, the real wages of non-white workers grew faster than white workers. Because the average education and skill levels of racialized minorities is lower than that of non-Hispanic whites, and, as we shall see, wage growth has been biased on both accounts, we should expect wages of white workers to grow faster. But this isn’t the case. The rate of growth of wages of non-whites is the same as that for white workers plus an error term that might be correlated with the economic cycle — in the sense that the wages of non-whites, who are over-represented in underprivileged sectors of the US economy, grow faster late in the cycle once the labor market tightens. 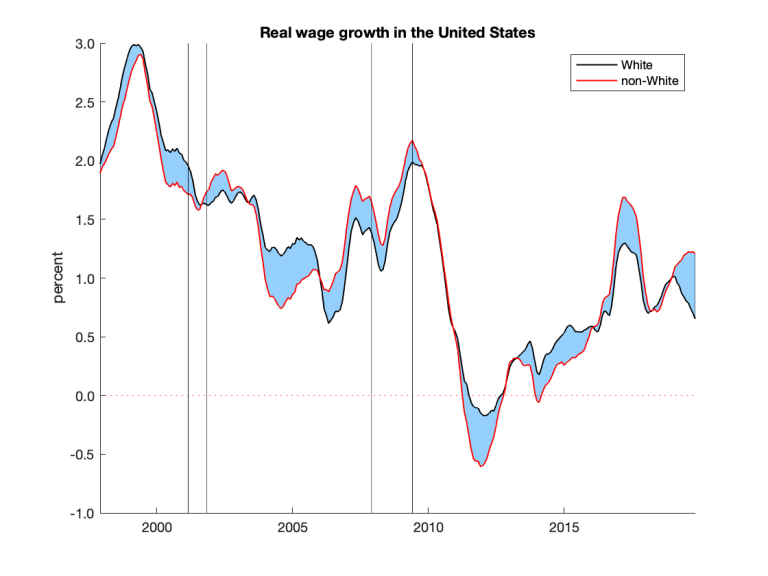 Likewise, there is not much of a gender bias. Although it is true that women’s wages grew less fast than men’s wages earlier in the current cycle. The difference is not substantial; but it is significant. 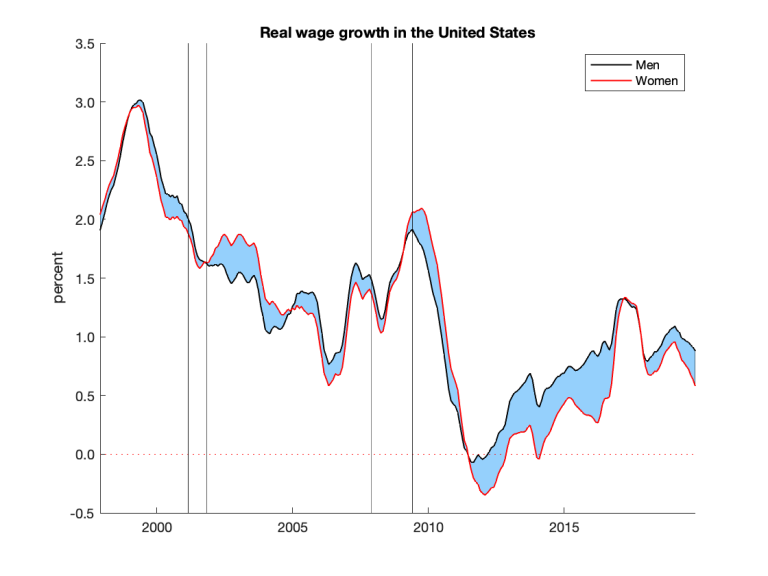 The real problem is that real wage growth in the modern economy is strongly class-biased. Since 1998, on average, college-educated breadwinners have seen their wages grow 0.5 percent faster per annum than high school graduates. Recall the power of compounding — such systematic differentials make a huge difference over the working life of a breadwinner. 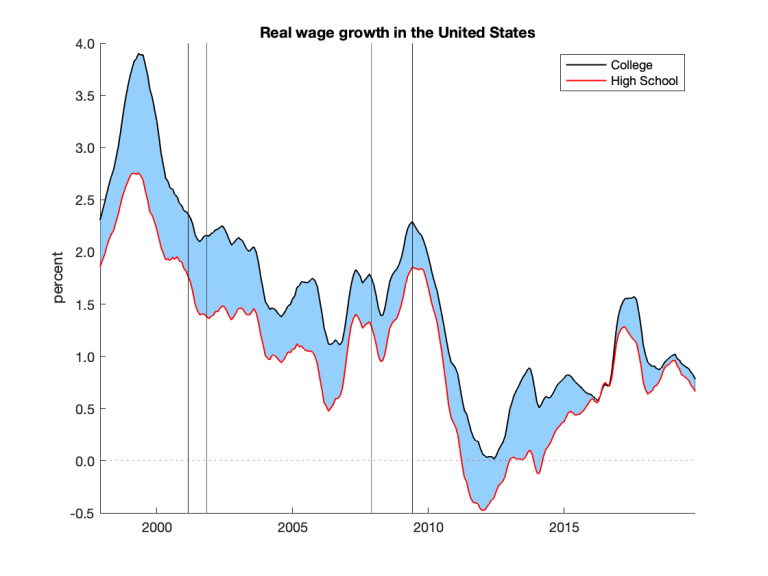 The source of the class-bias in real wage growth is what economists call ‘skill-biased technical change’. The real wages of high skill breadwinners has grown, on average, a full percentage point higher per year, compared to low skill breadwinners. Since 1998, high skill workers’ real wages have grown at 4 percent per annum; that of low skill workers have grown at 3 percent per annum. This is the massive differential that is polarizing America. Desperate solutions are needed. But no one has a serious solution to this problem. The modern American economy is working somewhat well for the already well-to-do, despite the negative trend; it is failing the vast majority of the populace. 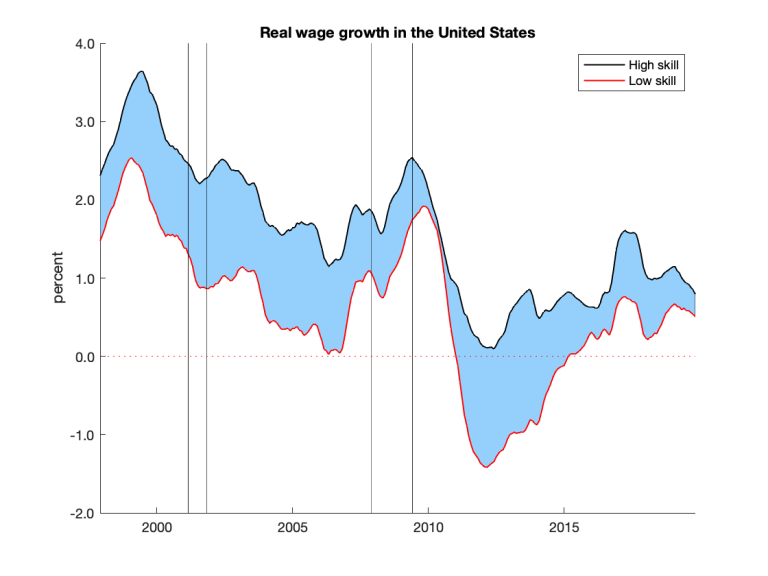 These differentials are of great political import in two senses. First, the bias is driven in part by the diverging fortunes of industries. Wages in finance and consulting grew dramatically faster than manufacturing until the global financial crisis. That differential has since vanished. 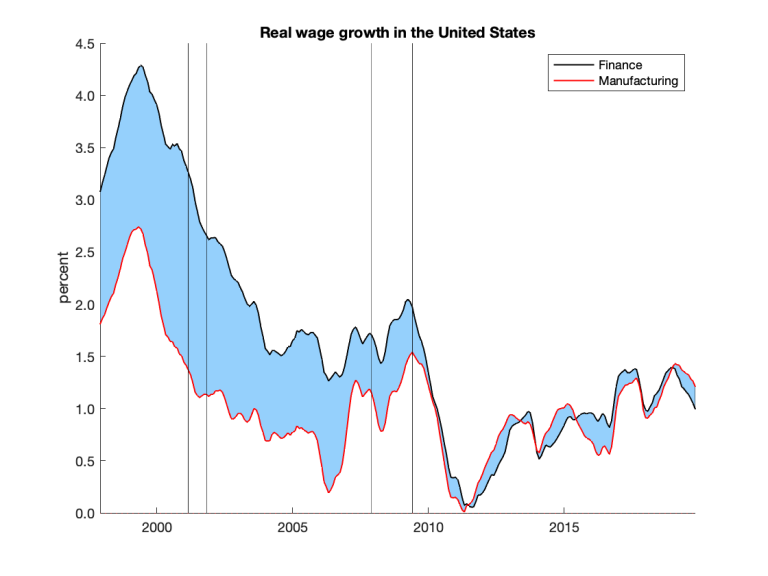 Real wages in finance &c have, however, continued to grow faster than the hospitality industry, where the bulk of the population works. 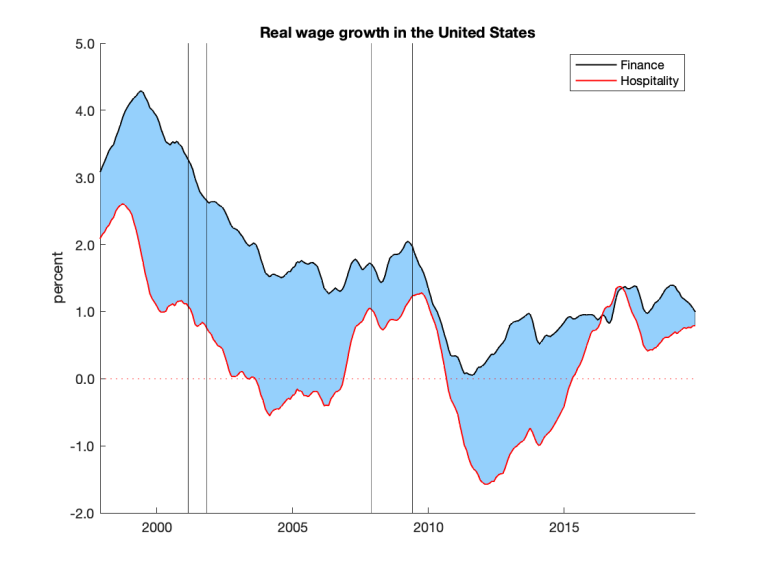 They have also continued to grow faster than in education and health — industries that are creating the largest number of new jobs in the American labor market. 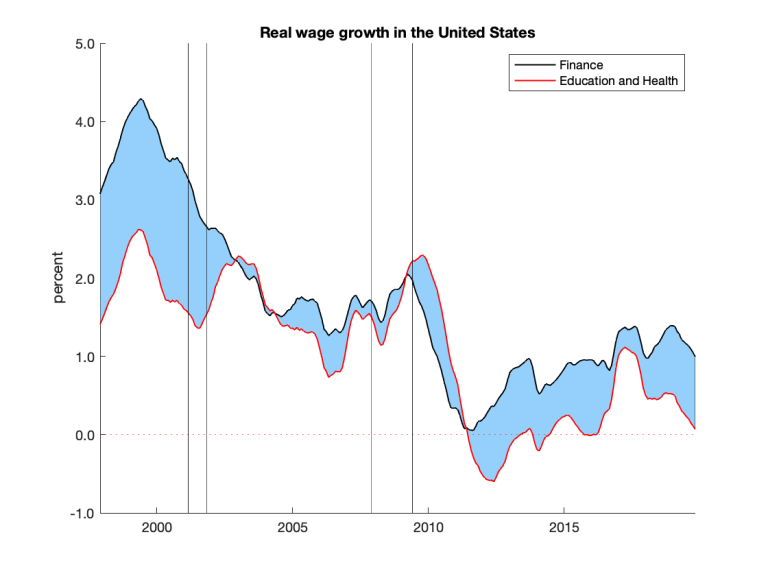 The diverging fortunes of workers in different industries is of great import because of the shadow cast on society by business. Simply put, political power in a money-driven political system like that of the present-day United States, gravitates towards rising titans and away from declining firms.

The second, and even more important, political import of these differentials is due to the geography of the electoral college. The issue is that, because the prosperous sectors are geographically concentrated in the coastal belts, what is contemptuously called “flyover country” is being left behind by the modern economy.

The bias in favor of metropolitan areas is unmistakable. Big cities is where all the money is. 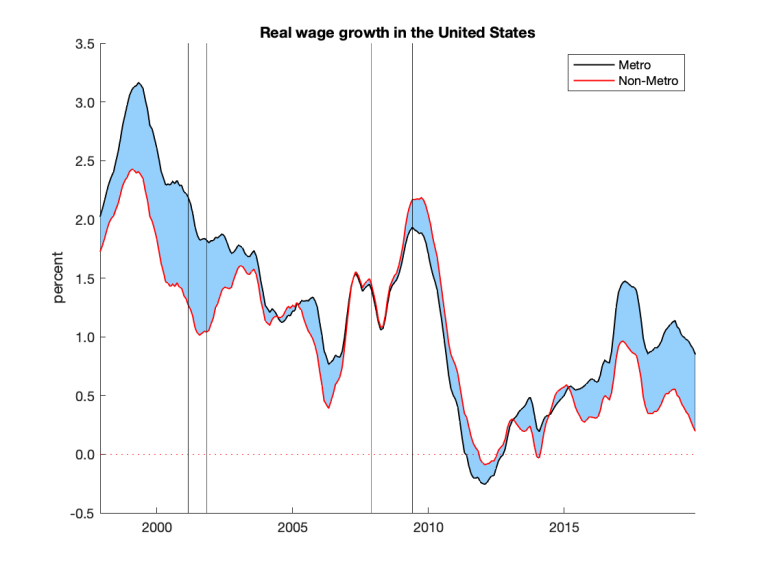 Real wages have grown faster in the zone of affluence in New England compared to the Mid-West (“East North Central” in Census lingo). The gap is now astounding. 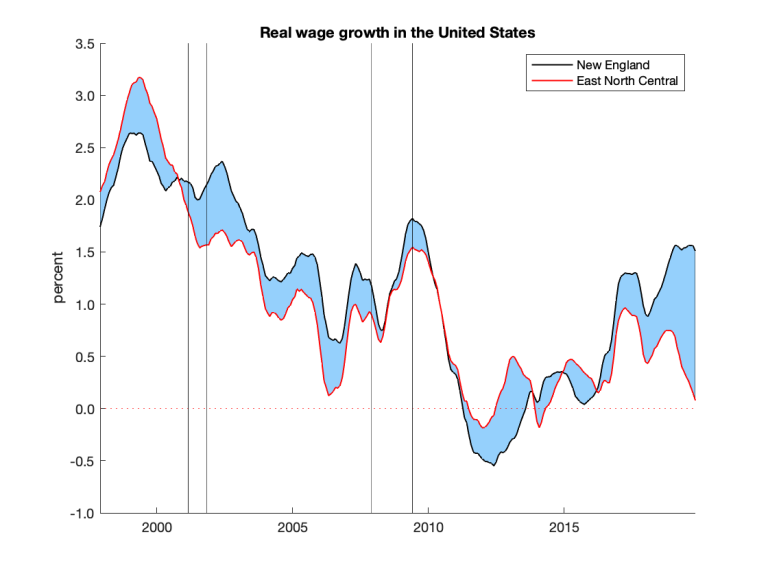 And that’s not even the worst of it. Wages have grown dramatically faster in the Pacific region, home to the tech industry, compared to the Mid-West. The political import of these facts should not be lost on anyone — the Mid-West contains most of the swing states. 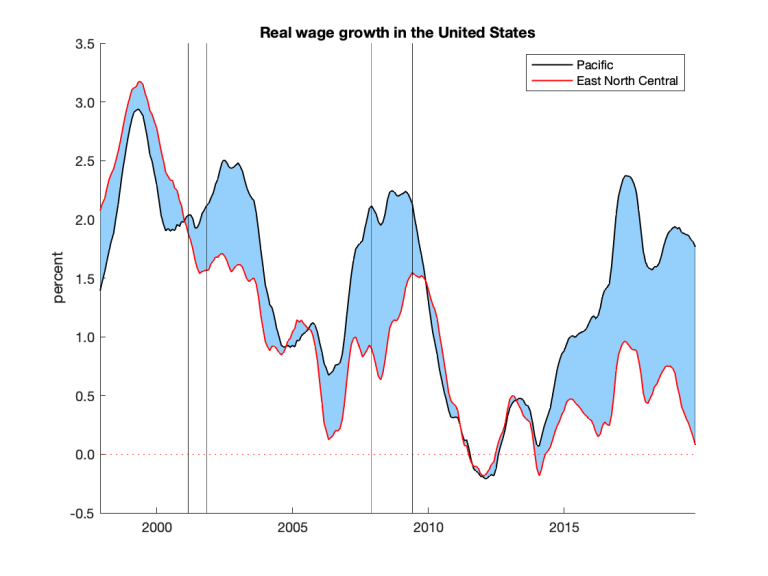 Here’s a map of the census regions. 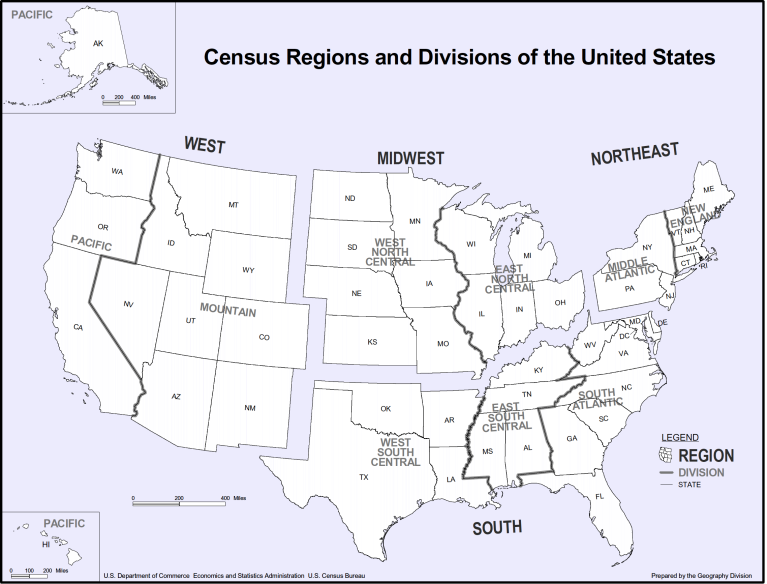 And here’s how fast real median wages have grown in these regions since the Great Recession ended. Note that these are median numbers, the averages must be dramatically higher in the fortunate regions because of the high salaries commanded in tech and finance. Note also that the high wage growth in the West North Central is likely driven by the shale boom. 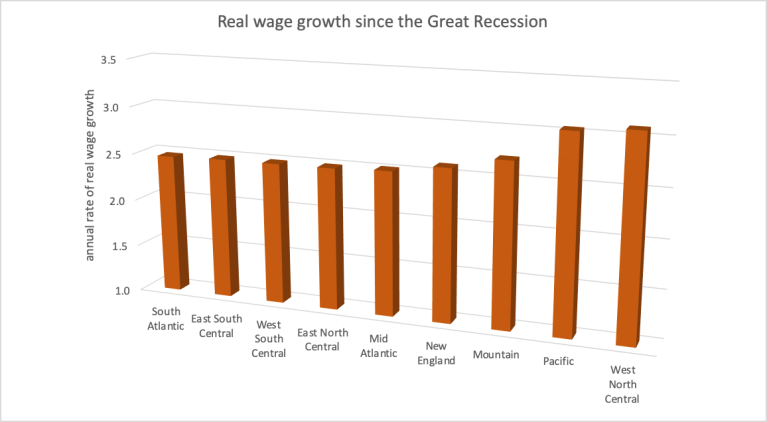 The picture that emerges is one of increasing vertical and regional polarization in the real wages of American breadwinners. These facts condition the present impasse of elite-mass relations and the attendant political instability. The problem is that no one has proposed any serious solutions. It is now high time to consider much more radical solutions. The most important of these, given the regulatory mechanisms in place for forty years, is a new mandate for the Fed. Specifically, given the fact that blue-collar wages grow faster only once the labor market tightens sufficiently, and given that there is no sign of inflation at all, the Fed ought to run the economy hot for longer. We are not at the mercy of the central bankers. Congress can and should mandate the Fed to treat real median wage growth as a measure of labor market slack — subject, of course, to monetary and financial stability. The war against inflation has been won. But the war against secular stagnation is being lost.

It is time for the central bankers to wake up and smell the coffee. Even if the Dems prevail in 2020, that would change nothing unless a real solution can be found to restore broad-based growth. For unless broad-based growth can be restored, elite-mass relations will keep deteriorating. And we will descend further into the impasse. The autonomy of central banking will then itself be at risk. Technocracy will give way to mobocracy unless real solutions to the central challenge of American political economy are found and enacted posthaste.