Due to a clerical error, the graph for the Presidency was wrong in an earlier version of this piece. My apologies.

Perhaps we have misdiagnosed our present predicament. Maybe we have made too much of the catastrophes of the mid-2000s. The breakdown in class relations, more precisely, elite-mass relations, predates these disasters. The unraveling of the class alliance undergirding social democracy has been unfolding slowly for decades. Distrust of elites is certainly not new. How can we get a handle on these social forces beyond the chimera of approval ratings and suchlike? The first step, as Ted Fertik suggests, is to set up the explanandum more precisely. We can’t hope to uncover the causal structure at play without a command of the facts.

No one actually tracks elite-mass relations directly. The best we can do perhaps — and I am most certainly open to suggestions here — is track perceptions of national institutions. They are the best proxies we have for mass (dis)trust of national elites. In what follows, we’ll examine data from the General Social Survey (GSS) since 1972. In order to avoid getting bogged down with various metrics, we’ll examine a single metric for thirteen national institutions. The GSS reports large national sample survey results for confidence in a number of institutions. The design is multiple choice, so the recorded results are categorical.

It should be noted that these are purely empirical facts. What we are doing here is setting up the explanandum. The goal is to fasten our perceptions to reality. Afterwards, we can attempt to explain these patterns. In particular, our goal is to pin down the temporal or diachronic pattern of elite-mass relations in the United States.

We begin the government. The prestige of the Presidency collapsed in the early-1990s. After a brief spike following 9/11, and a smaller one after Obama’s election, Net Confidence has fallen to its all time low. Some 44 percent of responders say they have hardly any confidence in the office of the President.

Perceptions of Congress are more representative of the general trend. We see a marked secular decline, and significant fluctuations. In particular, note the collapse in Net Confidence in Congress in the early-1990s. The collapse from 2002 is even more marked. Congress now has even lower prestige than the Presidency. 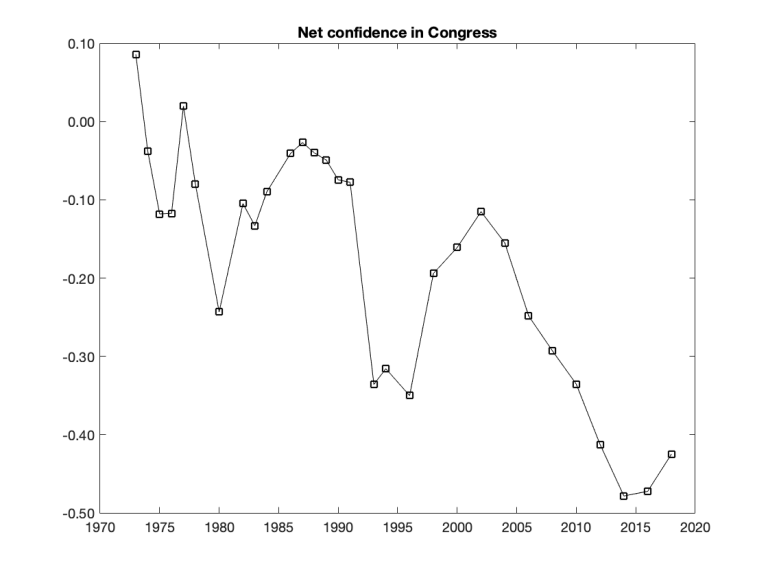 The Supreme Court is the most respected branch of the government. But even the Court has seen its prestige decline. Although the trend is less marked.

The Press has been losing prestige since the 1980s. But the decline in the early-1990s was particularly marked. Could this be about NAFTA?

Television next. The pattern is similar to that for the Press. The days of respected television commentators seem to be over for good. This is particularly jarring. Note the collapse in the early-1990s. 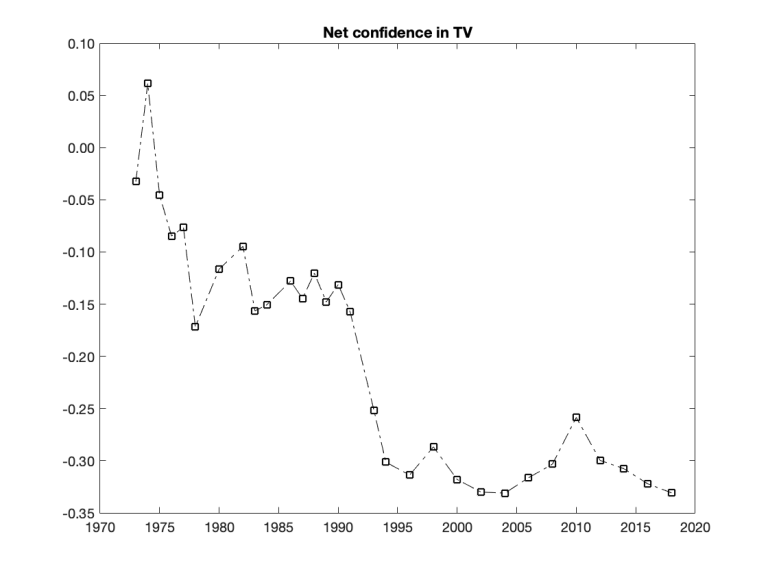 While the media and government lost prestige in the 1990s, Unions gained. They have gained even more since 2015. This is a hopeful development — despite the secular decline in membership.

On the other side of the Marxian axis, the prestige of major corporations collapsed with the dot com bust. They still retain more prestige than the Union though. And there has been a detectable revival in the last survey. 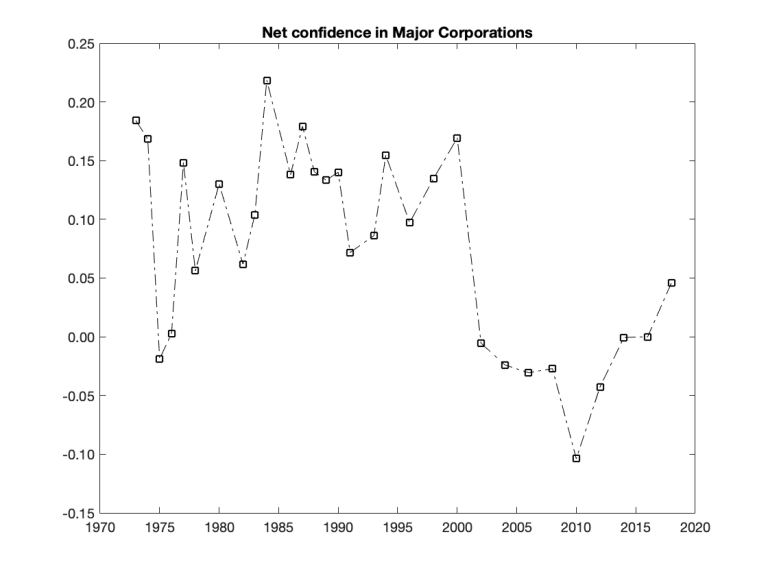 The military is the only institution that has both high, and rising, prestige. Americans really do love their military instrument. Note the spikes during the Gulf Wars. 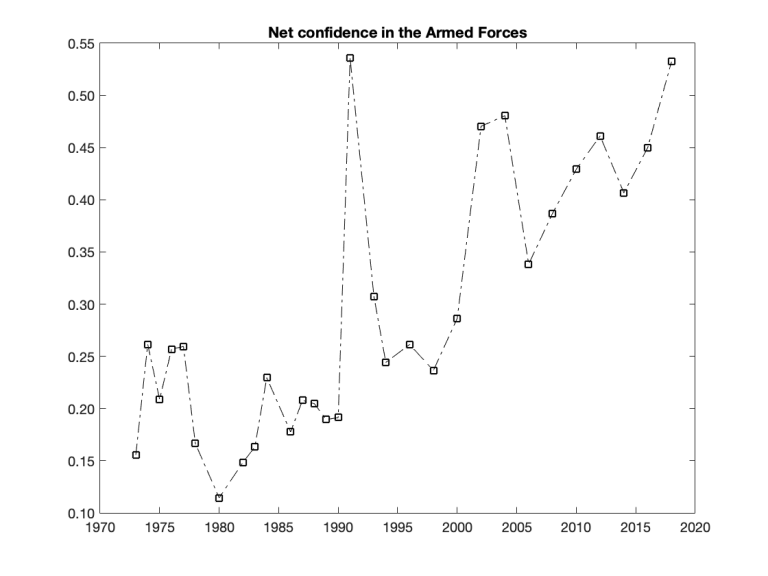 The medical profession has shared in the secular decline; although Net Confidence in doctors remains on the high side.

Educational institutions too have lost their former prestige. Again, the decline can be traced to the early-1990s. There was a revival of sorts in the 2000s, but that reversed after the GFC.

Apart from the armed forces and the Supreme Court, the only institution to have sustained high prestige is the scientific community. The contrast with the previous graph suggests that the collapse in prestige is confined to the non-sciences. Could this be a clue? 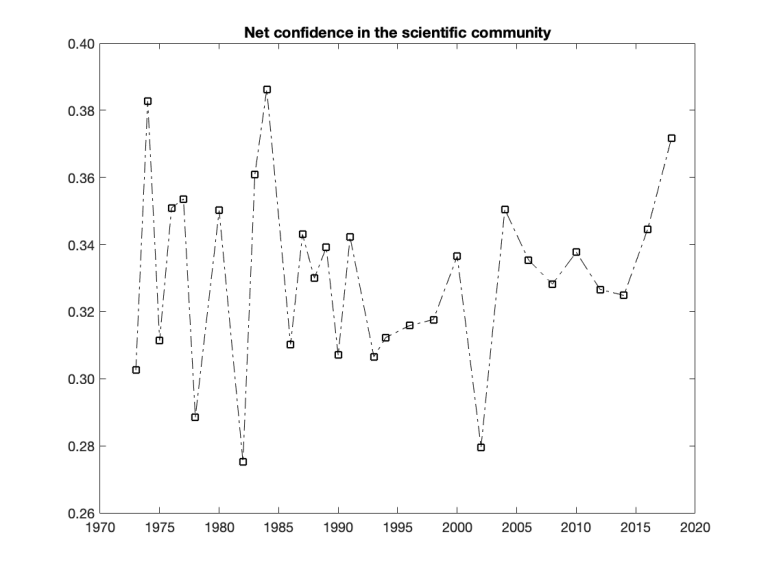 The prestige of Organized Religion too has been in secular decline. Net Confidence in the clergy has been negative since the GFC. This is a good sign that the breakdown in elite-mass relations is the underlying driver of these trends.

Finally, our aggregate measure, Net Confidence in National Institutions, also shows a secular downward trend. There was a sharp collapse in the early-1990s; a modest revival through the 1990s, followed by a sustained decline after 2000. In the last survey, there has been a modest uptick. The overall pattern does not change if we drop the armed forces or the Supreme Court.

Now let’s stare at these graphs for a while and try to divine what is driving these trends.

Bonus chart. In 2010, barely out of the Great Recession, people had less confidence in Congress and the Press than the Banks themselves.