Global warming can be locally-measured close to the location of the debate. NASA/NOAA has data from the weather station at Fort Meyers. Figure 1 displays the annual averages of daily maximum temperatures at this station. The trend over 1900-2018 is 1.5ºC per century. This is half as much again as the global average reported by NASA.

Florida sits within the subtropical zone. But this is not exactly low latitudes. Although less marked than northern stations, the seasonal cycle is comparable to mid-latitude locations.

The trouble is that the entire distribution is shifting to the right. The underlying trend component can be extracted from the covariation of station-level data from NOAA. We compile a data set of daily TMAX observations for 1,069 stations since Jan 1, 1900. We use Chad Green’s algorithms to back out seasonal and trend signals. The first thing to note is that there is very significant polar amplification. The high latitudes are warming faster than low latitudes. 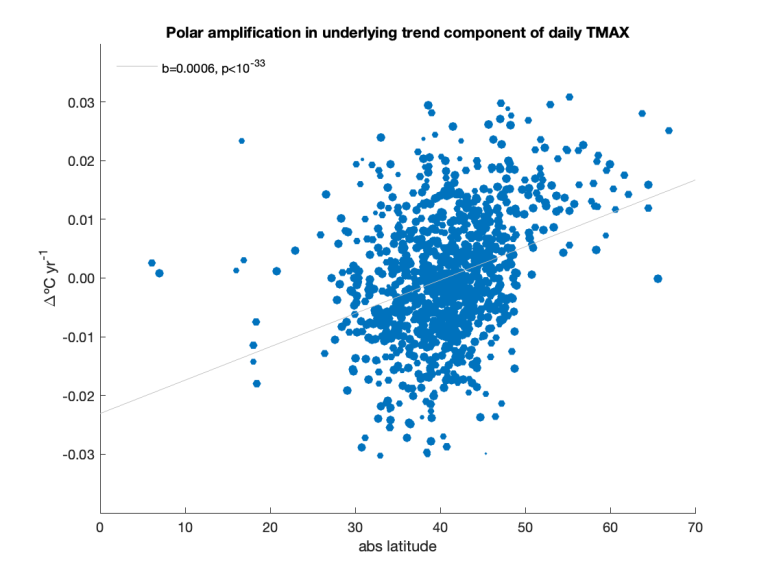 An independent test of this result is to examine the pattern of sensitivity to global mean surface temperatures (GMST) estimated by NASA/NOAA and displayed in the next figure.

In the cross-section of stations, the betas of annual means of TMAX with respect to GMST are correlated with absolute latitude. This is independent confirmation of the polar amplification parameter extracted using Chad Green’s algorithm.

The import is subtle but clear. Since the United States sits north of Florida, thermal burdens across the country can be expected to have risen even faster since 1900. We’ll test this proposition in a future post. For now note that as we go up the hockey stick of doom we are ratcheting up the forcing variable — CO2 — that is heating up our planet at a rate not seen in recorded history. This is the data for 2000 years from Arctic ice cores: 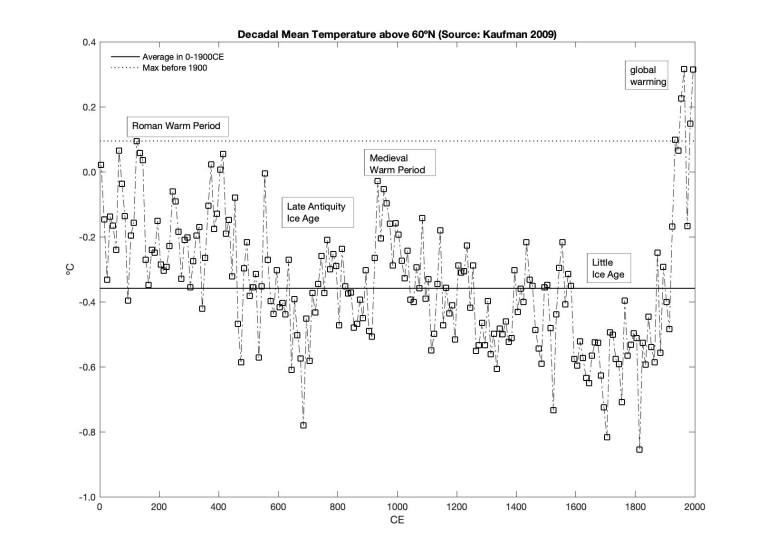 Nothing highlights the gap between discourse and reality than the DNC’s pig-headed resistance to hosting a climate debate. The DNC’s resistance is a symptom of a deeper malaise. What it captures is the disconnect between older voters who don’t get it and the young who will pay the price for their ignorance. One can call it an incentive compatibility issue. Those in charge are too old to face the true cost of their actions. And those who will bear the costs have no seat at the table.

The gerontocrats seem to have no idea what’s coming for them. No one has forgotten how they manipulated the primaries in the last cycle. Unless they wake up soon they’ll have a youth revolt on their hands. We’re talking another Chicago.

The old can no longer be allowed to hold the future of the young hostage. If heads have to roll, so be it.