American Economic Review is arguably the most prestigious economics journal in the world. So it was especially worrying to see them publish Ashraf and Galor’s thesis claiming a hump-shaped relationship between genetic diversity and economic development. The claim has a certain plausibility to it. Very high diversity can be expected to generate ethnic fragmentation, presumably a catalyst for politico-economic dysfunction. Societies with extremely low diversity, assuming straightforward biological reductionism, can be expected to generate fewer innovations than Goldilocks societies with near-optimal levels of genetic diversity. Ashraf and Galor have shown that the hump-shaped relationship is detectable even after controlling for a number of biogeographic conditioners. Yet, the thesis remains unconvincing on both theoretical and empirical grounds.

The fundamental problem is threefold. First, it is not clear that genetic diversity is capturing anything other than the arrested development of shatter-belts and marginal zones. As James Scott and other have argued, projects of state formation repeatedly drove oppressed populations into marginal regions, particularly in uplands; so that over centuries these counter-zones became permanently organized so as to resist the domination of the paddy states. The Balkans and mainland Southeast Asia are classic shatterbelts. But it may help to think of the entire globe as a vast shatter-belt shaped above all by massive expansions of farmers, pastoralists, and grain states. 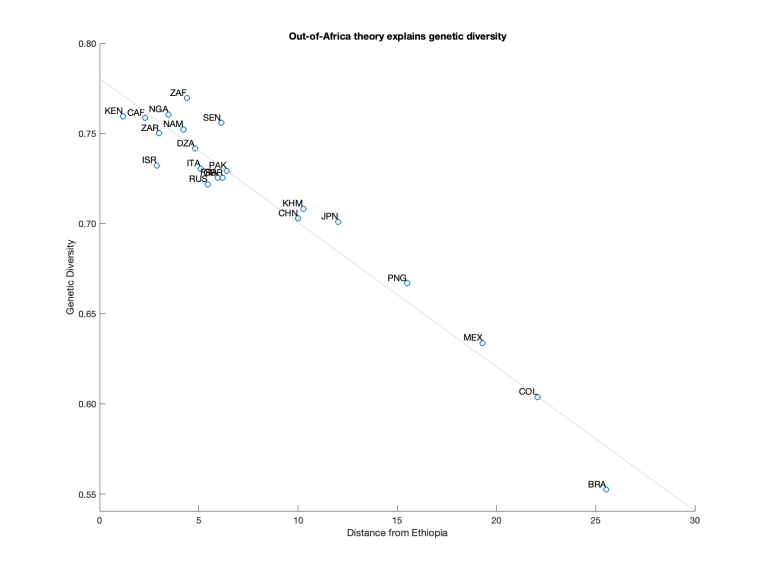 As the regular reader might have noticed, we have discovered a fairly reasonable method to compare the fixed effects of various conditioners. The trick is to consider the product of the absolute values of the slope coefficients and the interquartile ranges of the covariates. This allows us to visualize the relative magnitudes of the fixed effects in any multi-factorial model. Here we compare the relative effects of these two conditioners.

We have seen that Neolithic time-depth is explained by distance from the Levant. And we noted that absolute latitude made such a minor contribution that we decided to drop it. Yet, in a specification with distance from Ethiopia (A&G’s proxy for genetic diversity) and absolute latitude, we find an insignificant and minor effect for the former and a large and significant effect for the latter. The error bars display 95 percent confidence intervals.

Things improve for A&G when we look at log per capita income in 2000. Although the A&G factors are still smaller and less significant (tStat=3.2, -2.3) than absolute latitude (tStat=7.7). Moreover, the contribution of the offending quadratic term is small. Put simply, thermal burdens trump whatever effect too much genetic diversity may have on the economic performance of nations.

And whatever effect of the A&G factors that still survives in the 2-factor model vanishes once we control for the obvious biogeographic conditioners. Here we control for percentage of arable land, distance from waterway, elevation and roughness. Both the linear and the quadratic term for genetic diversity (proxied as above by distance from Ethiopia) fall into insignificance (the 95 confidence intervals straddle zero). 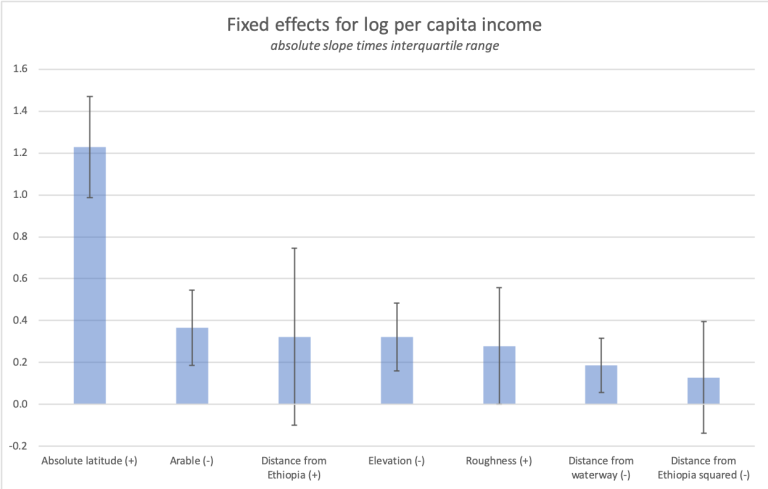 So, although plausible, the A&G thesis is easily debunked empirically. This is true of all neoracialist accounts we have so far on offer. Although such accounts are not usually accepted for publication in top journals.

Postscript. It is not every month that I challenge the results of a paper published in AER. But now that I am saying that the results claimed by Ashraf and Galor (2013) cannot be replicated, I feel obliged to carry out at least common robustness checks. The basic problem with cross-sectional OLS is heteroskedasticity, meaning that the errors usually have different variances. The error bars in the next figure are confidence intervals calculated using robust standard errors (Newey and West 1987).