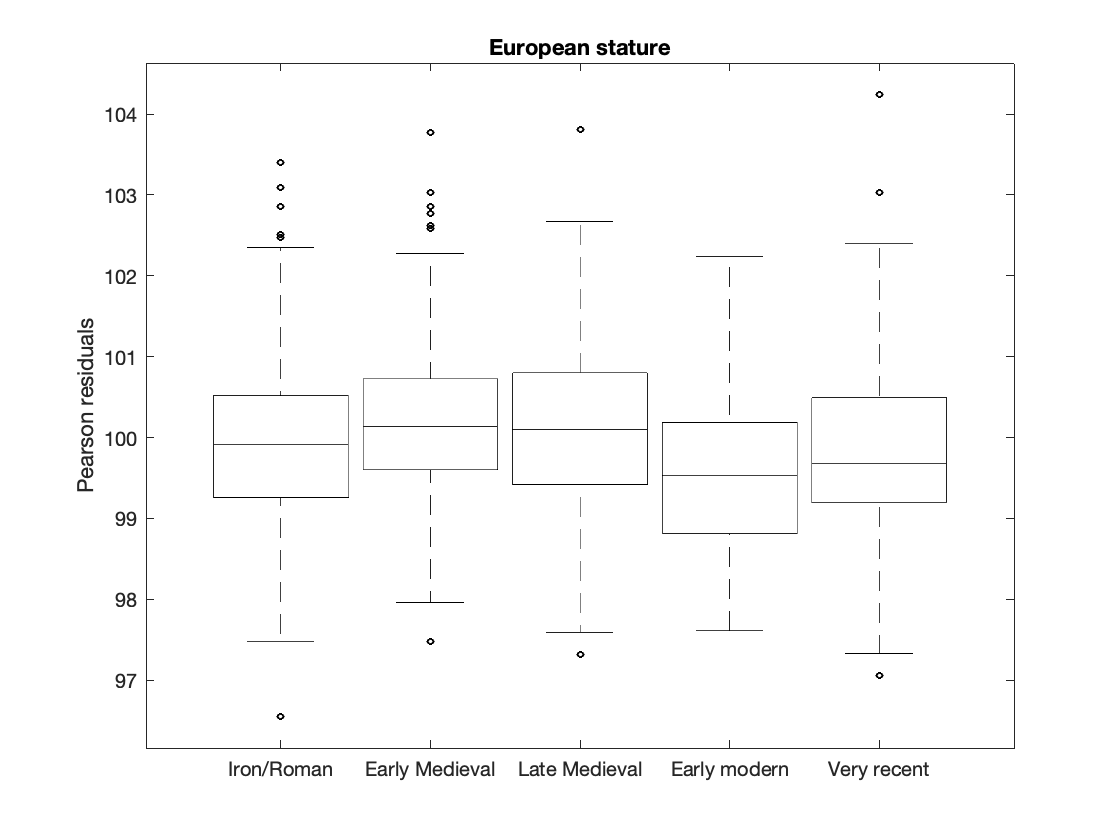 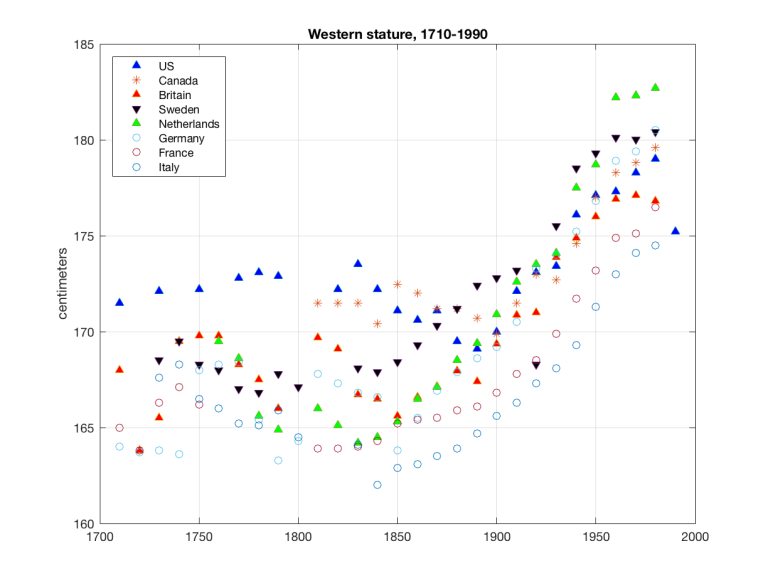 Is the above graph evidence of an exit from the Malthusian Trap posited by modern economic historians? For a long time that has been the received wisdom. But only because economists studiously ignored accumulating evidence of much higher living standards before the Columbian era of world history. Seen in the really long run, it really has been downhill from the days of the Gravettian mammoth hunters. But that is far from a story of uniform decline. The LGM bottleneck generated a dramatic decline in body size. The invasions of central Eurasian farmers and Yamnaya pastoralists witnessed massive sex-biased partial population replacement. So the changes between the Late Upper Paleolithic and Iron/Roman periods cannot be interpreted as changes in living standards. Fortunately, there were no further massive population pulses coming to Europe so that we may indeed interpret the collapse in body size between the Medieval and Early modern eras as evidence of a severe fall in living standards. 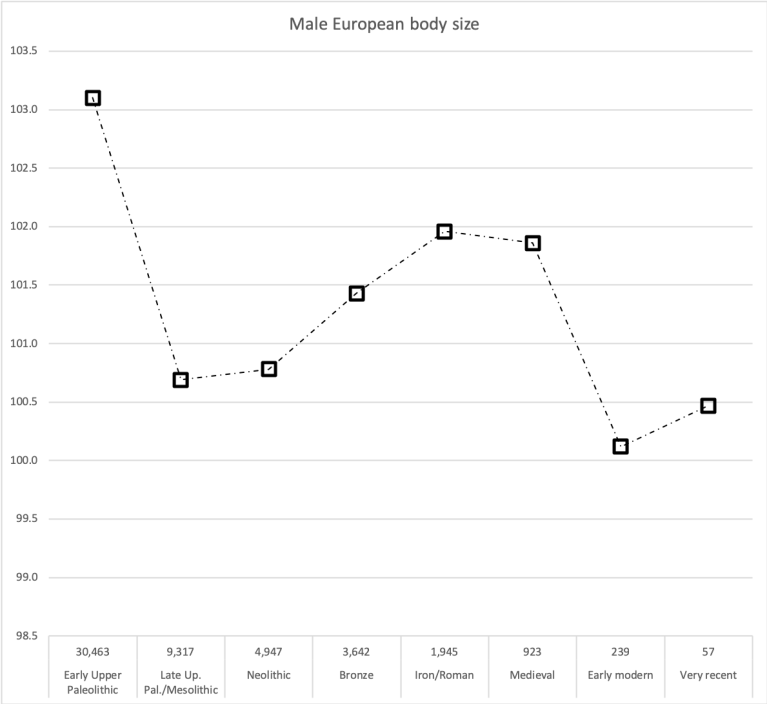 But hang on, I showed in the previous dispatch that latitude is a strong correlate of body size variables. So how do we know for sure that these shifts are not measuring rebalancing along the latitude gradient? Perhaps the Early Modern collapse is simply a compositional effect due to differential population growth along latitude? In order to make sure that our results are robust to population history, sex, and latitudinal effects, we shall control for sex and latitude and restrict our attention to the period after 250 BCE. We plot Pearson residuals to examine the diachronic pattern in size variables unexplained by sex and latitude.

We begin with the main result. Table 1 reports the P values for Student’s T-tests. Smaller values indicate that the change between periods is significant. Recall that stature is a function of femur length and body mass is largely a function of femur head diameter or pelvic bone width. The bone lengths are more reliable than body mass and stature estimates because they are actual measurements.

We see that the collapse in body mass associated with the Late Medieval-Early modern is extremely significant. Let’s look at what this looks like. We begin with stature, perhaps the easiest to interpret anthropometric measure of living standards. Interestingly, the fall of Rome was followed by a significant increase in stature. The rise in stature in the very recent period is also statistically significant. 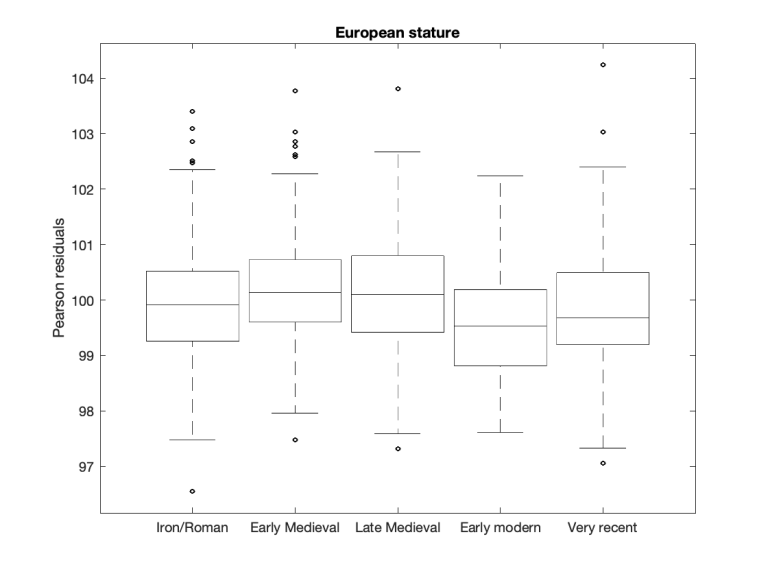 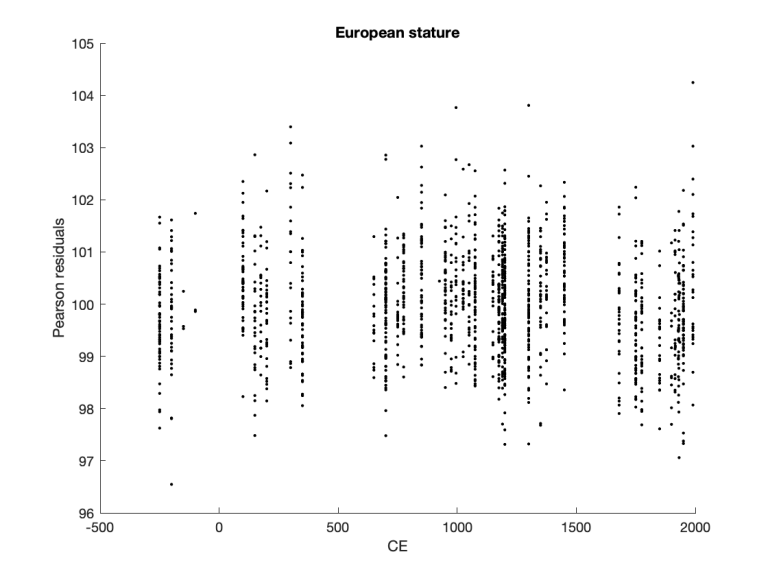 With body mass, only the Late Medieval/Early modern collapse is significant. Body mass is an excellent measure of the scale of the nutritional needs of an animal, so the fact that we see no rise in the Early modern/Very recent transition suggests that our most recent sample is indeed quite limited. The rise in European body mass in the twentieth century has been much more dramatic than that evident in these graphs. But again, we are not going to change anything by hand. Even if the sample is unrepresentative, let the data speak! 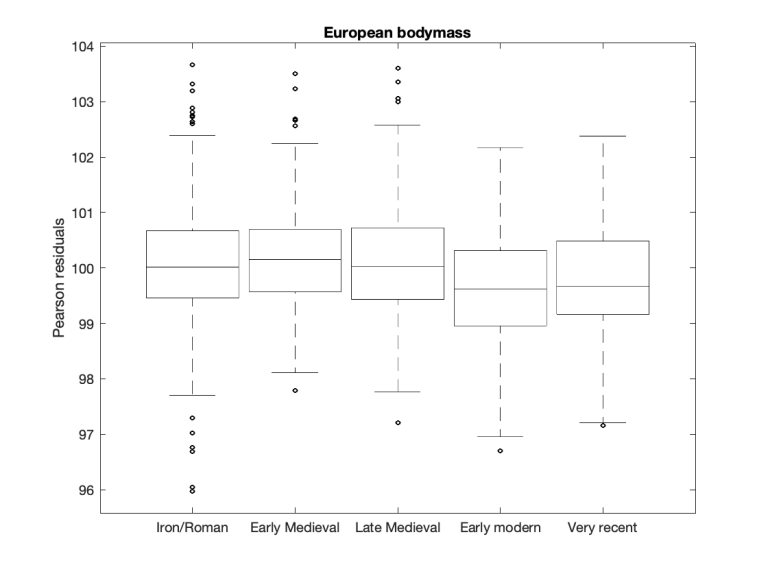 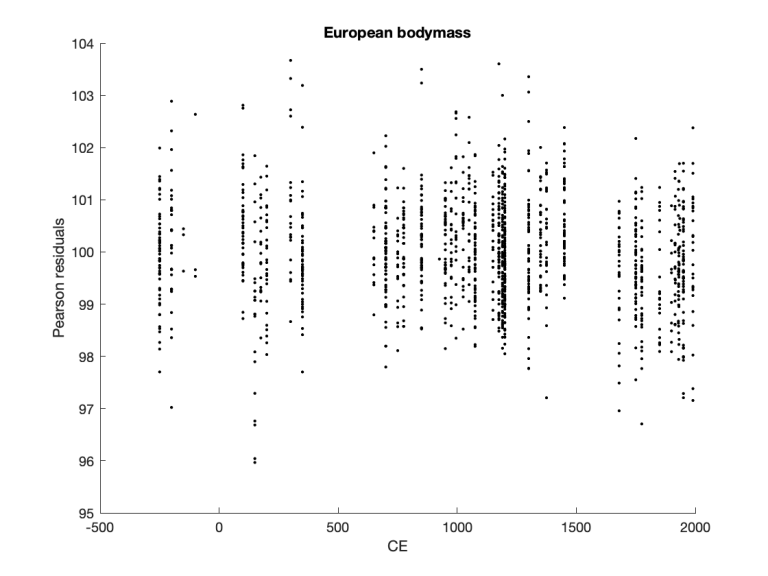 As mentioned before, direct bone measurements are more reliable than allometric estimates of stature and body mass. Of all our measures, the one that contains the most information on living standards is femur maximum length (the length of the thigh bone), which controls stature. Table 1 shows that the increase after the fall of Rome and the Early modern collapse are significant at the 1 percent level. The recent rise is significant at the 5 percent level. 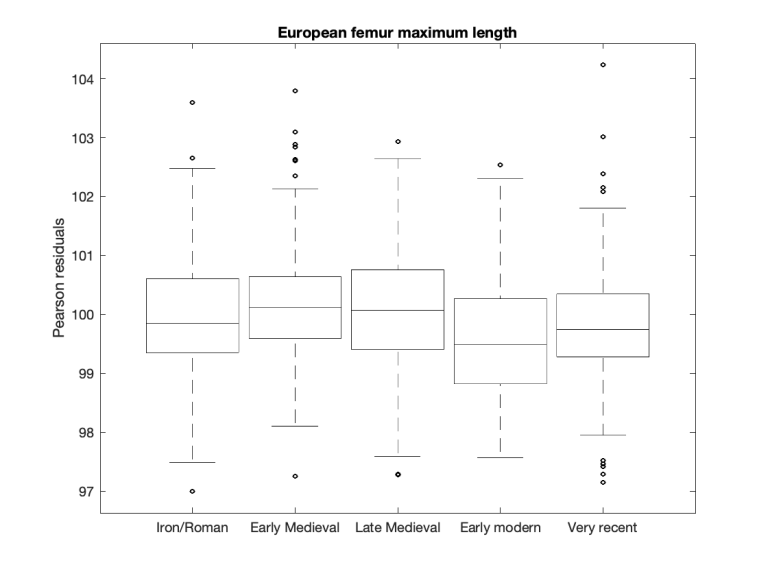 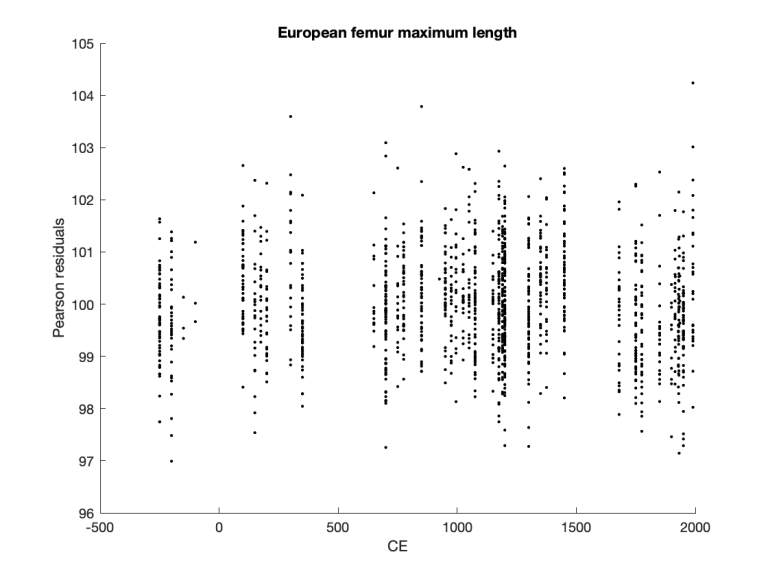 Femur head diameter and pelvic bone width are less plastic or slower moving than femur length (ie they are under tighter genetic control). Nonetheless they are excellent indicators of overall body size; at any rate better than body mass estimates due to estimation error. Bi-iliac width or pelvic bone width is particularly important because it controls natural BMI. Populations with wider pelvic bones have higher BMI, meaning that we should really not be using BMI as a rough measure of fitness for that penalizes people with wider pelvic bones for no good reason.

Since femur head diameter and pelvic bone width are very slow-moving (canalized) we should really not expect to see much movement in these variables in the few generations that make up the Early modern-Very recent transition.

In line with the stability of pelvic bone width, we find that only the Early modern collapse is significant. Even more than stature, the collapse in pelvic bone width reflects a prolonged, multi-generational deterioration in living standards that worked at least partly through selection against bigger, more expensive bodies. 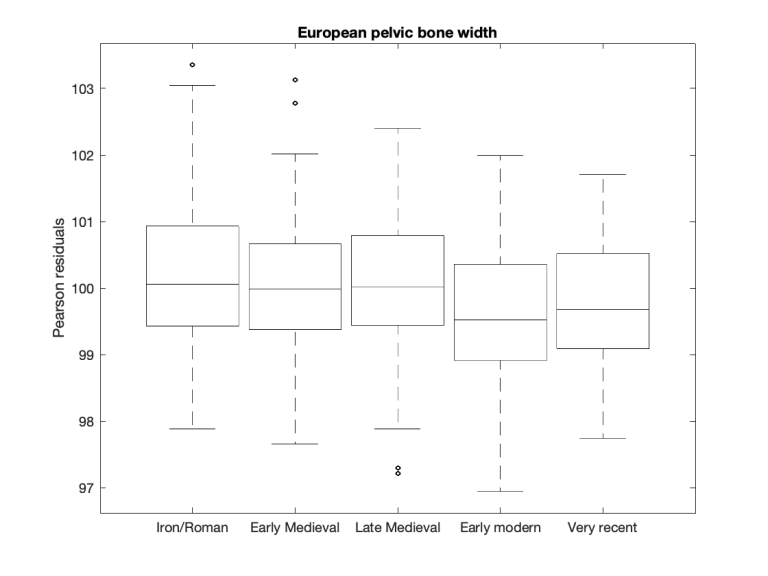 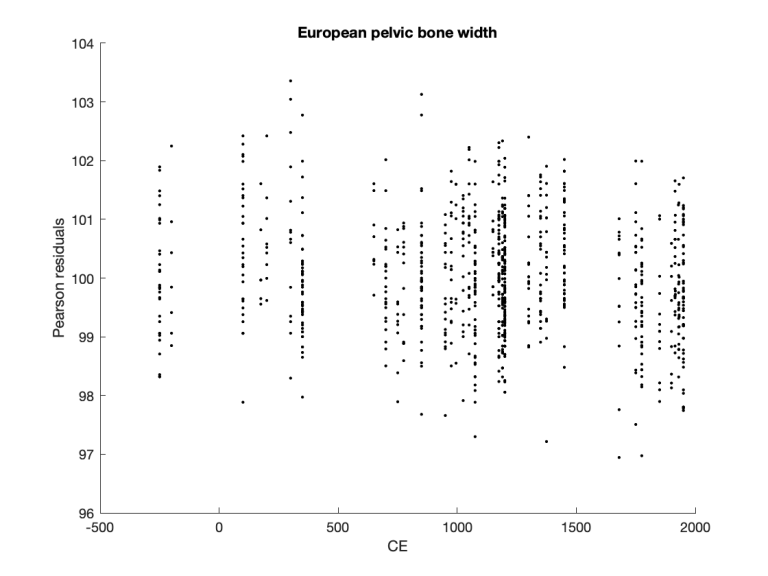 Femur head diameter is also heavily canalized (ie under tight genetic control). The Early modern collapse in this variable is significant at 1 percent. The increase in femur head diameter after the fall of Rome is also significant at the 5 percent level, suggesting that the improvement in living standards during late antiquity were prolonged enough to change European genotypes over centuries. 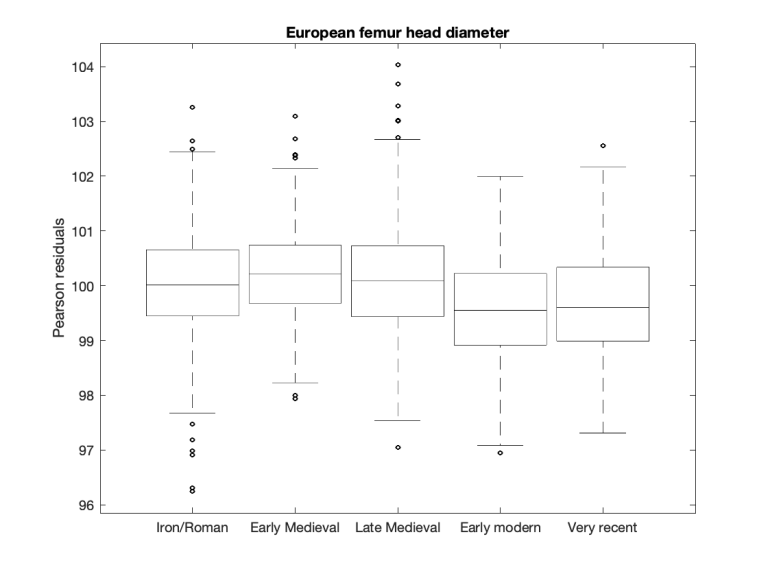 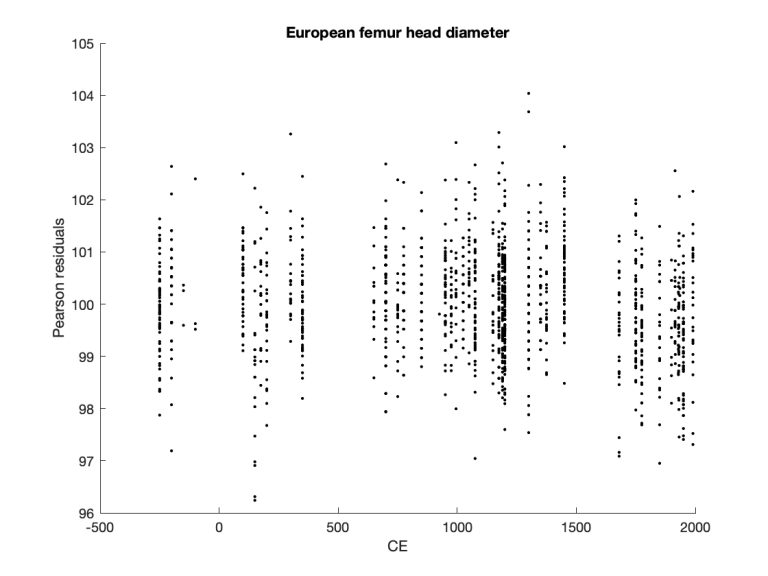 Zooming into the past 2500 years helps us see the major shifts in European living standards. The big picture is that living standards improved after the fall of Rome and collapsed outright in the early modern transition. The latter in particular demands explanation. I have suggested previously that the collapse may be related to epidemiology (due to both the epidemiological unification of the world and early modern urbanization that resulted in greater incidence of communicable diseases). The strong selection against big bodies suggests that this factor may have been crucial. That would also explain why net nutritional standards rose dramatically after the introduction of indoor plumbing, modern medicine, urban sanitation, and public health measures from the late-nineteenth century onwards.

Is it not astonishing that in the very centuries than Europe was spreading its dominion over the world Europeans were literally shrinking?