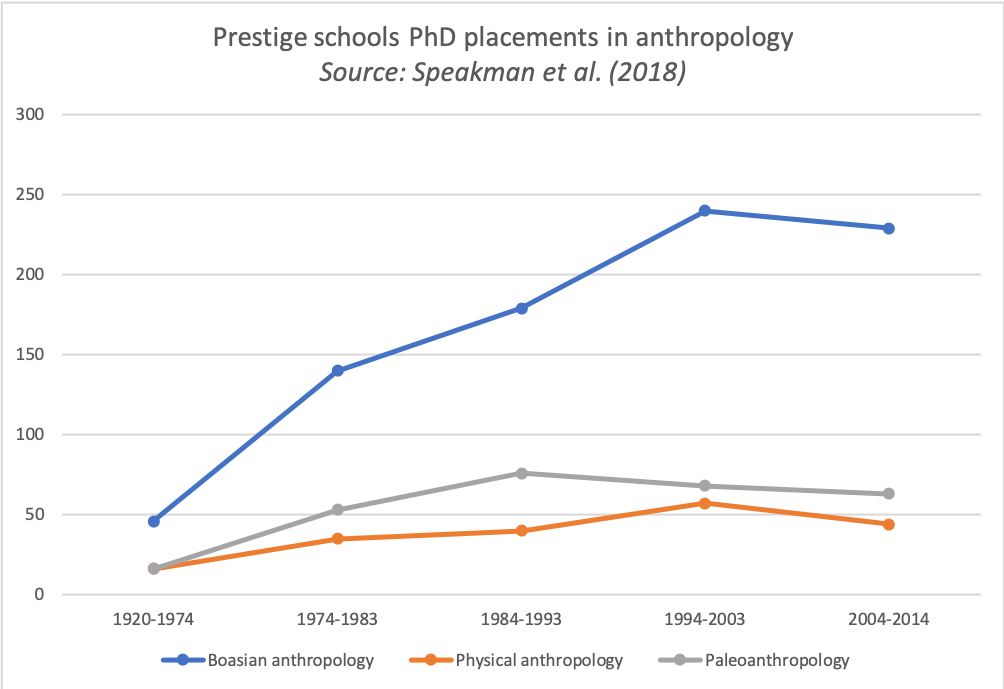 Physical anthropology began as racial anthropology—as the science of race. Although Boas and his students had been challenging scientific racialism since the turn of the century, the Boasian critique did not become politically significant until the 1930s when Ruth Benedict and other students of Boas at Columbia University began to mount a frontal challenge. Even after Auschwitz, racialism refused to relinquish its hold on the scientific mind. It was not until after the antisystemic turn of the 1960s that Boasian antiracism got the upper hand on racial anthropologists in the larger discourse. That turning point can be dated quite precisely. It was when Coon was pushed out as the President of the AAPA in 1963. Still, it is clear that the scientific status of race remained contested territory since otherwise Lewontin’s famous intervention in 1972 (showing that racial taxonomy could explain no more than a negligible fraction of human genetic variation) would not have been necessary. By 1994 certainly, Boasian antiracism had become hegemonic in the larger discourse, as became evident in the controversy surrounding the publication of The Bell Curve.

Having narrowed down the rise of Boasian antiracism to between 1972 and 1994, I have tried to pin down the periodization further. My working hypothesis, based on readings in paleoanthropology, is that the turning point — the onset of hegemonic Boasian antiracism — can be dated very precisely to 1987 when novel radiometric and molecular evidence resolved the long-standing debate between partisans of Multiregionalism and Out-of-Africa theories of the ethnographic present. Put simply, it became impossible to deny that all present-day non-African populations were descended from populations that had dispersed recently from Africa. The upshot was that not enough time had elapsed since the Out-of-Africa dispersals for allopatric subspecies or continental races to develop isolating mechanisms — understood certainly after Mayr (1963) as the dominant process by which continental races emerge in the animal kingdom. Boasian antiracists could then shout down racial anthropologists by pointing to the increasingly unambiguous evidence for the recent Out-of-Africa hypothesis. It thereby became the go-to weapon in the antiracist arsenal.

Jeremy Kessler suggested that I narrow down the scope of the enquiry so as to be able to craft a tighter narrative of this intellectual history. That’s very good advice. There is a hell of lot going on in the Western imaginary in the race question, especially in the United States. It is simply too ambitious to attempt a broader history of everyday racial anthropology so to speak. While it may have broader implications, I will confine my attention to the scholarly discourse within anthropology.

So what happened in anthropology between the 1960s and the 1990s?

Part of what happened is that anthropologists began to realize that racial taxonomy provided a poor handle on human biological variability. In this process, Lewontin’s intervention and subsequent analyzes by other physical anthropologists were crucial. As important was the rise of population thinking. It became more and more obvious that the right unit of analysis to interrogate human variability is not continental races, subraces, or any such essentialist taxa, but rather naturally-occurring situated breeding populations or demes. With the possible exception of geographic isolates, there is always gene flow between demes largely as a function of distance, so you get diagnostic clines for polymorphic traits reflecting isolation-by-distance and diversifying selection. That’s the point of departure to understand human biological variability.

What this means is that phylogenetic trees that suggest racial classification to Nicholas Wade and other neoracialists, do not in fact reflect the existence of races since there is always population structure for any taxonomic level above that of the deme. That is, the interpopulation variation within these taxa (the hypothesized races) is more often than not greater than that between the taxa. For instance, there is no such thing as the Australian race because there is more interdemic variation within this taxon than without. So the taxa in the phylograms I constructed from craniofacial and cranial data are not allopatric subspecies or races since populations within them differ as or more dramatically from each other as they do as a group from others. The best way to see this is to “zoom in”. The point is brought home forcefully in the following figure. Panel A illustrates the population structure of Eurasia using the first two principal components, while panel B zooms into Nepal’s neighborhood. Forget about there being a South Asian race (or North Indian and South Indian or whatever). Even among the Nepalese the Magar deme is closer to the East Asian cline, while the Chhetri deme is closer to Indian Brahmins. This kind of population structure is characteristic of human biological variation. It makes mincemeat out of racial taxonomy.

But what happened in anthropology was not simply scholars changing their mind about the usefulness of racial taxonomy. No sir. What actually happened was more like a Thirty-Year War. Simply put, physical anthropology was gutted. Boasian cultural anthropologists mounted relentless attacks on their colleagues in physical anthropology, who they regarded as overwhelmingly racist whatever their politico-ethical stance. Relatively fewer and fewer were given tenure. Many were driven out of the Ivory Tower. Ever fewer were hired to replace retiring professors. This one-sided warfare unfolded between the 1960s and the 1990s, until Boasian anthropologists established unchallenged supremacy in anthropology departments.

I have been looking for ways to test these working hypotheses. Recently I found a study looking at PhD placements in anthropology. The big story there is that only one in five PhDs in anthropology as a whole finds academic employment in degree granting institutions. Prestige schools obviously do much much better than their less prestigious counterparts. (Prestige schools here refers to a dozen top schools that account for a large share of PhD production and placement in anthropology: Chicago, Berkeley, Harvard, Michigan–Ann Arbor, Columbia, Stanford, UCLA, U Penn, NYU, Yale, Cornell, and Princeton.) With the expansion of PhD programs elsewhere, as the next figure shows, their share of placements have been declining since the 1970s. Prestige school PhDs secured almost half the academic positions in 1920-1972. Their share has since dropped to a third. That’s still a lot.

Of course, this sort of numbers game cannot prove my case. For that I need to interrogate the anthropology discourse at length. But I think these numbers do provide some empirical foundation for the story of the rise of Boasian antiracism in the intellectual history of American anthropology.