Brenner suggested on these pages that US capital formation has slowed drastically. Is that true? In trying to answer that question, I found the god of modern economics. More precisely, I figured a way to nail down the correct metric for capital formation and that allowed me to measure residual productivity growth; the great unexplained of modern economics. The reason why economics does not have a theory of innovation is that it falls in the social realm; in the specific sense of Matthew Crawford’s ‘ecologies of attention’. I figure that total factor productivity is a function of the vitality of situated communities of knowledge. People engaging together with the machine face incentives endogenous to the situated community centered on the machine. Firms become more productive when—as situated communities of knowledge—they learn better ways of solving their problems and increasing productivity.

Firms increase productivity in two ways: (1) deploying capital in productive assets (machinery and so on) and (2) figuring out better ways of working said assets. In order to estimate the contribution of (2) we have to nail down (1). For (2) is the residual; the portion of variation in productivity unexplained by (1). The best way to nail down (1) is to consider the net (of depreciation) stock of corporate fixed assets since firms can let capital stock erode by not replacing or repairing equipment and structures et cetera. That is, corporate investment spending may not be enough given the variation in depreciation. Instead, what we really need a handle on is capital accumulation. Figure 1 presents the raw series for growth in the net stock of fixed assets of US firms. It suggests a secular decline in US capital formation since 1966.

The problem is that much of the variation observed in Figure 1 is an artifact of demographics. Figure 2 shows the scatter plot and series for growth in net stock of corporate fixed assets and growth in prime age population for the United States. 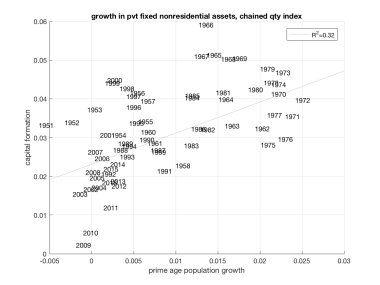 We must control for demographics. There are two ways to factor out the contribution of demographics. (1) Linearly project the variation of one on the other and use the OLS residuals. (2) Look instead at net capital stock per prime age adult. Happily, both yield very much the same dynamical behavior and predict labor productivity equally well. We use (2) because it admits a straightforward interpretation as capital intensity—capital stock per prime age adult. Figure 3 displays our metric for capital formation. We don’t control for real output growth or capacity utilization because of issues concerning endogeniety: Sure, capitalists are investing less because growth is slow but growth is also slow because capitalists are investing less. But assuming that demographics is exogenous is a useful fiction.

You can think of the graph displayed in Figure 3 in two ways: as detrended capital formation, or more precisely, as growth in capital intensity defined as the natural log of the ratio of the net stock of corporate fixed assets (chained quantity index) to prime age population. We can see that there were investment booms in the nineties, the fifties and the sixties. The two booms in the late sixties and the late nineties stand out. This observation is strengthened by the dynamical behavior of the stock of equipment and the average age of the equipment. Figure 4 shows the growth of the net stock of equipment per prime age adult. We see that average age falls in investment spurts and rises otherwise.

There have been two spurts in underlying productivity by our metric. A big one in the early sixties and a medium-scale one in the late-90s and early-2000s. The Sixties’ Boom stands out prominently. What explains the productivity miracle of the 1960s? That’s the big explanandum thrown up by the present study.

To gather our findings together: Looking at investment ignores depreciation. Looking at growth in net capital stock suggests a secular decline since the mid-1960s. But that is in fact an artifact of demographic shocks. Looking at the ratio of net capital stock to prime age population controls for these demographic shocks. We find two prominent investment booms in the sixties and nineties. Perhaps not coincidentally, these two periods are also times of significantly positive multi-year pure productivity shocks.

The sixties were a period of unabashed hegemony of the Chandlerian firms. Manufacturing corporations accounted for more than half of all corporate profit in 1967-1969. See Figure 7. We must ask a more precise question than what’s special about the sixties. We must ask, What was going on in these Chandlerian firms that was specific to the sixties? or that was premised on conditions that prevailed only in the sixties? Did it have something to do with the passage of the reins of power to the ‘organized intelligence’ running these great corporations, pace Galbraith? seen as ‘ecologies of attention’, pace Crawford? In other words, could it be that corporate freedom from ‘shareholder value’ empowered the engineers running these corporations and allowed them to solve problems faster, thereby increasing effective knowhow? Or was it the flowering of the ‘corporate-liberal synthesis’? or maybe even the full flowering of ‘Fordism’ and ‘the Treaty of Detroit’? What the hell was going on in the sixties?