Tom Edsall suggested that I look at the regional socioeconomic correlates of Trump’s electoral performance. Why that didn’t cross my mind before I know not. But here goes.

Political polarization in the United States means that the overwhelming best predictor of a major party presidential candidate’s electoral performance is the performance of the previous candidate of the party. This was clearly the case in this election. [All data in this post is at the county level. The socioeconomic data is from GeoFRED while the vote count is from here.]

In what follows, therefore, we will look at the correlates of Trump’s performance relative to Mitt Romney’s in 2012. This is the cleanest way to control for partisan polarization. We’re going to examine the socioeconomic indicators of counties where Trump gained vote share compared to Romney.

More sophisticated strategies are certainly possible. But this strategy will allow us to visualize the data cleanly. 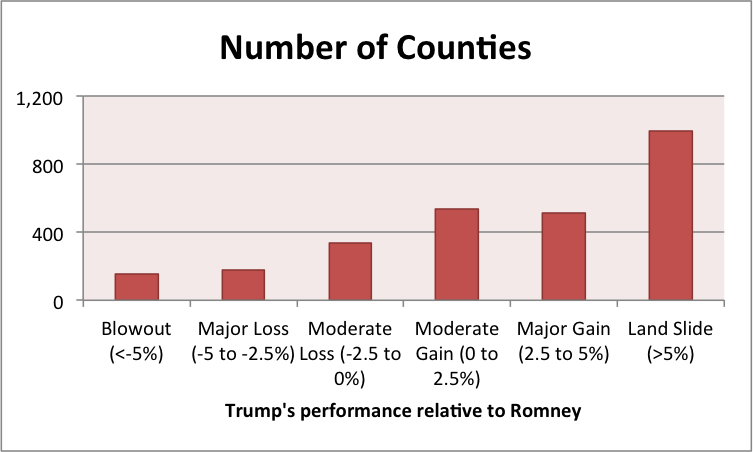 But most such counties are very sparsely populated. The most populous counties actually went for Clinton at higher rates than they had gone for Obama in 2012. These two charts illustrate the GOP’s astonishing geographic advantage. 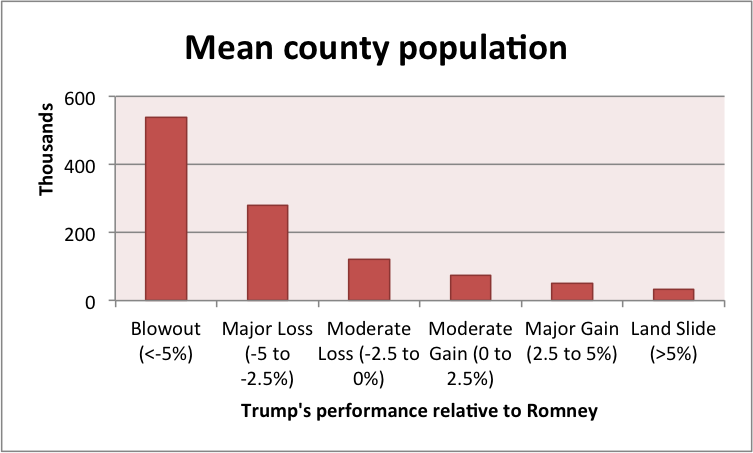 Let’s move on to socioeconomic variables. The next two charts show the median household income and per capita incomes averaged over all the counties in each of the six buckets. Both paint a consistent picture: Trump did worse than Romney in a typical affluent county, but did better than him in poorer counties. But neither was a strong correlate of Trump’s performance. Median household income and per capita income explain only 13 percent and 10 percent of the variation in Trump’s performance relative to Romney respectively.

The percentage of college graduates on the other hand, is a very strong predictor. It explains 35 percent of the variation in Trump’s relative performance. High school diploma rate is, however, a poor predictor. Still, counties where Trump did worse than Romney typically had higher percentages of people with high school diplomas.

Trump did better than Romney in counties where poverty and unemployment rates are relatively high. Although the gradient is not constant.

Similarly, Trump did well in counties where the proportion of people relying on food stamps is high.

But his performance was uncorrelated with crime rates. On the other hand, it was correlated with youth idleness rate—the percentage of 16-19 year olds who are neither working nor employed. 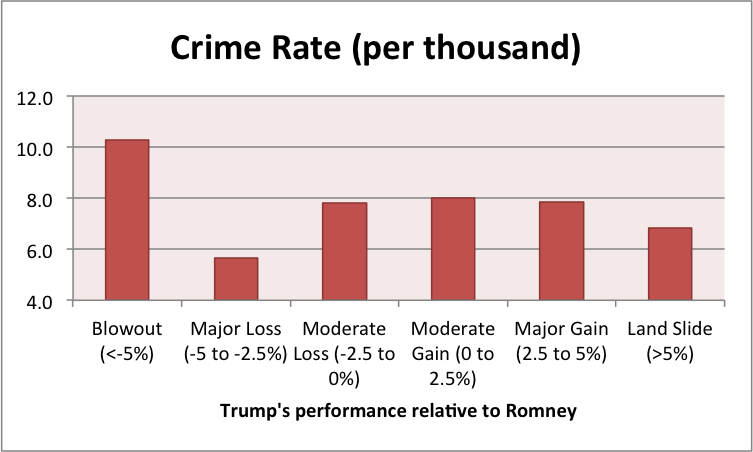 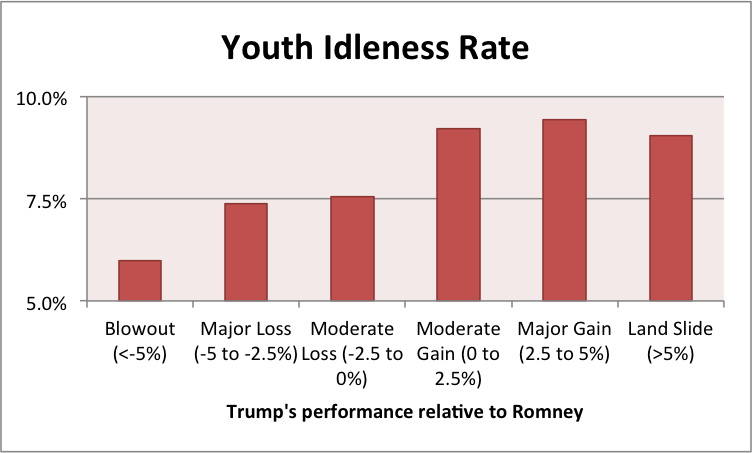 Similarly, counties where Trump improved on Romney’s performance had higher percentages of families with children that are single parent households. 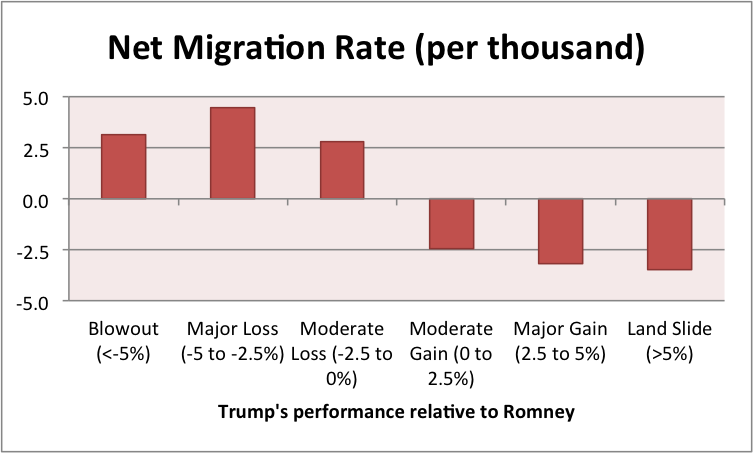 A consistent picture emerges from all these charts. Trump got to the White House by outperforming Mitt Romney is counties that are less educated, have lower incomes and higher poverty rates, where a greater proportion of people rely on food stamps, where many young adults are idle and children are growing up in broken homes. This is the America that is getting left behind. People are quite literally leaving these counties for greener pastures.

We have yet to tackle the why of it all. Why has America become so regionally polarized? Is it global trade? Automation? Skill-biased technological change? The neoliberal policy consensus? The political economy of Washington, DC? A fairly coherent narrative can be constructed along any of these threads. It is much harder to evaluate their relative importance. And even harder to devise meaningful policy solutions.

While we quietly thank our stars that Trump is getting tamed by adult supervision, we cannot go back to ignoring fly-over country. For we now know quite well what happens when we do.