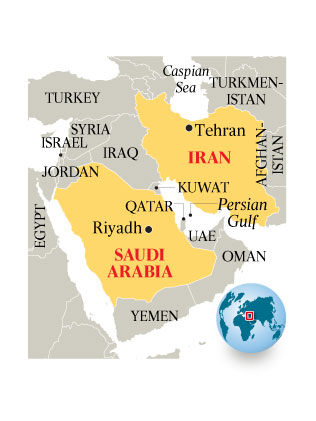 F. Gregory Gause III is perhaps the world’s most sophisticated scholar of the international relations of the Persian Gulf. His work has featured often on these pages. It is therefore a novel experience for the Policy Tensor to beg to differ with (some of) his latest working paper. Let me briefly recap his argument before laying out my criticism.

…sectarianism is not imposed on the region by Riyadh and Tehran. These two powers take advantage of sectarianism, but they do not cause it. Rather, the salience of sectarianism in Middle East politics today is the result of the weakening and collapse of the state across the eastern Arab world. State weakening brings forward sub-state identities, like sectarianism. In the ensuing civil wars, the local players seek out regional allies. Sunnis naturally look to Saudi Arabia; Shia to Iran. Sectarianism is a bottom-up phenomenon. Saudi Arabia and Iran are simply playing a balance of power game, driven not by age-old sectarian hatreds but rather by regional geopolitics.

So far so good. After discussing the mechanics of the Saudi-Iranian regional rivalry, Gause argues:

It is possible that, over the course of 2016, the fiscal realities of lower oil prices might induce both sides to rethink, if not their overall rivalry, at least its intensity. There are two drivers here. One is the simple cost of sustaining clients throughout the region and, for the Saudis, direct intervention in Yemen. The second is the realization that only through some kind of production-restraint agreement among major OPEC and non-OPEC oil producers can oil prices be pushed up significantly in the short term.

This is where I profoundly disagree. While it is not out of the realm of possibility that the fiscal implications of persistently low oil revenues may moderate Iranian and Saudi foreign policy, the idea that a production-restraint agreement can push up oil prices is simply wrong. The problem is straightforward. The fracking revolution has not only brought forth additional millions of barrels a day in capacity, it has also changed the elasticity of crude production; thereby permanently undermining the cartel’s pricing power.

It takes a few years–sometimes up to a decade or more–to significantly expand capacity in traditional fields such as those in the gulf. On the other hand, frackers can expand and shrink capacity in a matter of months (because each unit is very small scale). Even if the Russians, Saudis and Iranians somehow managed to restrain their total production–and we are very far from that scenario–any persistent uptick in the price of crude would be met by an expansion of American capacity, which in turn would bring down the oil price. The days of triple digit prices are well and truly over.

This is, of course, not a new observation on the pages. When the Saudis launched their price war, the Policy Tensor had argued that it would fail to accomplish either of the goals. As predicted, the ensuing pain led the Iranians to sign on the dotted line drawn by Obama. And persistently low oil prices failed to drive American producers out of the market.

I am not saying that some sort of rapprochement across the gulf is not possible; for instance, as a result of a more even-handed US gulf policy. What I am saying is that even if a rapprochement obtains, it would not result in a sustained rise in the price of crude.