Prussia and later Germany in the classical European balance of power, and Israel in the post-colonial Middle East are in the first category. Surrounded by hostile states and with neither the resources nor the manpower to win long, drawn-out wars of attrition, the militaries of both states cultivated an art of war that sought to front-load conflicts and seek the decisive victory. At the geostrategic level, both sought the patronage of wealthy maritime powers—Great Britain for Prussia and the United States for Israel—who bankrolled their arsenals and provided economic and diplomatic support. These comprehensive strategies for survival allowed these modern day Spartas to prevail against gangs of larger and more populous neighbors.

States that punch below their weight include Spain in the seventeenth century and Russia in the late nineteenth. Imperial Spain made it a habit of losing to ostensibly weaker powers after a much smaller English fleet sunk the Spanish Armada in 1588. In 1905, Russia lost the first great power war of the century to Japan, a state with a vastly smaller material endowment. In the present day, all concerned agree that, if it ever came to blows with Iran, Saudi Arabia would lose hands down, despite its almost 2-to-1 advantage in economic size.

Despite these anomalies, it is still largely true that states with greater war potential can expect to prevail against states that are relatively less well-endowed. By war potential, I mean the size and sophistication of the economy, size and skill-set of the population, and national endowments of arable land, iron ore, rubber, coal, oil and gas et cetera.

In the Second World War, once Hitler failed to capitalize on the July results of Operation Barbarossa and the US emerged as an ally of the Soviet Union, the outcome was overdetermined by the Allies’ crushing advantage in material capabilities. The United States and the Soviet Union could field many more rifles, tanks, field guns, warplanes and fighters than the Germans. On the Pacific front, Japan had no choice but to surrender, precisely because of its material inferiority. Similarly, in World War I, the Americans’ credible promise to land a million troops on the continent directly led to the November Crisis of 1918 and with it the capitulation of Germany. The Germans simply did not have the wherewithal to mount another Spring Offensive.

But let me not belabor the point. Material advantage matters. The question is how to measure it. Organski has argued that GDP is an excellent metric. The reason is that it captures a number of things that are relevant to the war-making capabilities of a state. Unless a state has well-functioning institutions, large material endowments, and a large, skilled populace, it is unlikely to have a very large economy. Obviously, this doesn’t work at every level. For instance, a middle power with a very large GDP due to a especially large endowment of crude oil is unlikely to be very powerful—think Saudi Arabia.

But GDP is unlikely to catapult a state to the top ranks of global power unless it is broadly representative of national capabilties. Indeed, there are no counter-examples to be found in the modern period. And because the global balance of power is a game played by only the chosen few, it doesn’t matter much if our metric doesn’t apply to every state. Moreover, it can be shown that more complicated metrics do not materially alter our findings.

Many metrics include standing armies and military spending. For instance, the COW Index is a simple average of normalized indices for GDP, military personnel and military spending. Such metrics are good for capturing the military balance in the short run but are at best irrelevant, and at worst misleading, for the medium and long run. If you live in a tough neighborhood, a powerful standing army is certainly a must. But if you are offshore or if you are ‘hiding your strength and biding your time,’ you can afford to keep your power latent and call it forth as needed.[1] For instance, in 1939, the United States had the smallest standing army among the major powers. Yet every great power statesmen was well aware that the US was the strongest power in the system and that its weight would decisively alter the course of the war. What truly matters for the balance of global power is war potential, not extant military power.

We are used to thinking in terms of polarity—the number of great powers in the system, i.e., the number of states that can that can put up a fight with the strongest state in the system. With some quibbling, most realists would accept the usual characterization of the post-Soviet world as unipolar, the Cold War era as bipolar, and the European-dominated era before the end of the Second World War as multipolar.

In what follows, I will contest this characterization. I will argue that the world since the close of the nineteenth century has been near-unipolar; that if one studies the distribution of global power with a finer tool than counting the number of states that can put up a fight with the top-ranked power, one can discern continuity and change to an extraordinary degree; and that the near-unipolar world is coming to an end.

By near-unipolar, I mean something weaker than the statement that there is only one great power in the system. More precisely, by near-unipolar I mean that there is one especially strong state in the system so that there is absolutely no doubt about the identity of the top-ranked power.[2] And that the gap between the strongest state and others is so great that no state can hope to prevail against it in a war or an extended rivalry. Importantly, unlike the definition of unipolarity, near-unipolarity does not require the absence of other great powers. Lesser great powers can and do exist in a near-unipolar world—they just have to worry a great deal about what the unipole has to say before they decide on any matter that has a bearing on the world situation. A near-unipolar world is a heliocentric system—the international system is centered on a single power.

The tool that I have in mind is the Ray-Singer Index.[3] It is effectively a normalized version of the Herfindahl–Hirschman Index that is used to measure concentration in a system (such as an industry or a balance of power system). The Herfindahl–Hirschman Index is the sum of squared percentage shares of the units in the system. The Ray-Singer Index normalizes it such that it takes a value between 0 and 1. It attains the value 0 if every unit has an equal share, and the value 1 if a single unit accounts for 100%. It has the property that any upward redistribution of shares from lower-ranked to higher-ranked units increases the value of the Index. And it depends continuously on the share of very unit and treats them symmetrically. Formally, it is given by

Figure 2 shows the evolution of the Index during the Cold War. According to our typology, the Cold War-era was decisively near-unipolar: The Index averaged 44% during 1948-1989. Equivalently, the United States accounted for 72% of total great power GDP. The lowest value reached by the Index was 39%, equivalent to a US share of 69% of total great power GDP. We can see that the tide began to turn against the Soviet Union in the late-1970s. By 1989, the United States had reattained the primacy it lost in the mid-1950s.

How does Schweller’s tripolar interwar system fare by our measure? Figure 3 shows a schematic typology for three power systems. We see that the index is not enough to identify the polarity. But if the broad contours are known, then the evolution of the system may be examined by charting the Index.

Figure 4 shows the evolution of the Index for Schweller’s three power system during the leadup to the Second World War. Where Schweller sees tripolarity, the Index shows unambiguous near-unipolarity. 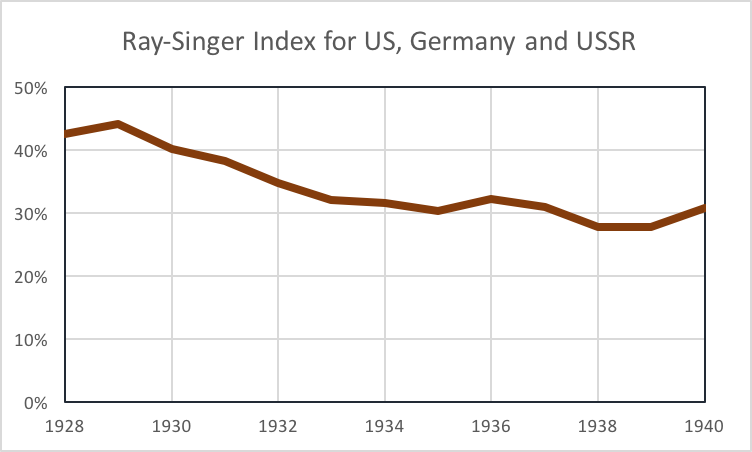 Figure 5 shows the Index for world powers (US, UK, USSR, Germany, Japan and France) and Eurasian powers (UK, USSR, Germany, Japan and France) in 1928-1940. We see that Eurasia was by itself quite competitive. But the inclusion of the United States dramatically increases our measure of concentration for the world system as a whole. That is, during the 1930s, the world as a whole was considerably more concentrated than Eurasia. In other words, it was a near-unipolar world.

What about the classical world? Surely, the world was decidedly multipolar before World War I? Not quite. The Index reveals that the world was indeed very competitive in the 1870s. But starting in the 1880s, the United States reshaped the structure of the international system. Even as Europe remained decidely balanced, the world itself became more and more imbalanced. By 1910, global power potential was twice as concentrated at the world level as at the European level.[4] And the reason was clear: A continental-sized superstate of hitherto unimaginable power potential had suddenly arrived on the world stage. The world was already near-unipolar before the collective suicide of Europe began on the fields of Flanders.

In the throes of the Belle Époque, Europeans marveled at the astounding scale of American wealth but were generally sanguine about the geopolitical threat from across the Atlantic. Once they had slaughtered each other’s young at sufficient scale, they finally awoke to the dawn of a new order—Adam Tooze shows how dramatically European attitudes changed in 1916.[5] Europe, for centuries the unabashed master of the planet, had finally been provincialized. Victor and vanquished alike marched to Washington to take orders. Henceforth, Washington would be calling the shots.

Examining the entire postwar period through this lens and considering a broader set of major powers—US, UK, France, Germany, Italy, Russia, India, China and Japan—we see that the US share of major power GDP tracked the Index closely until 1990. (See Figure 7.) Concurrently, the Index for the rest of the major powers was essentially flat until then—Eurasia was very competitive even as the world remained tightly centered. Then, in 1990, the Eurasian Index took off dramatically and kept climbing, taking over the World Index in 2006. After 125 years, Eurasia had finally become more concentrated than the world.

In order to see what’s going on after 1990, we decompose the Eurasian Index. Figure 8 displays three Ray-Singer Indices. The blue one is for the seven major powers (US, UK, France, Germany, Russia, India, China and Japan). The orange one excludes the US. And the yellow one excludes both the US and China. 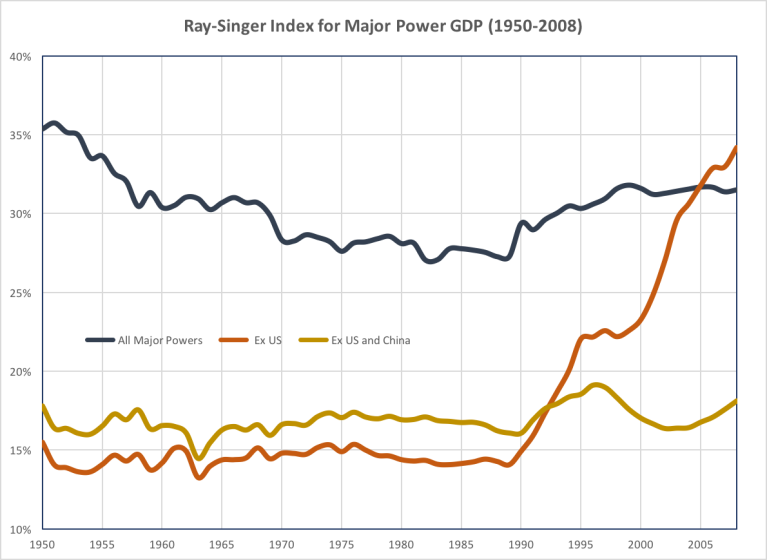 We’ve seen this film before. It’s the same pattern we saw a hundred years ago and for the same reason: The rise of a continental-sized superstate that dramatically changes the distribution of global power. But this time, instead of a multipolar world giving way to a near-unipolar one, a near-unipolar world is giving way to a bipolar one. Perhaps this essay should’ve been titled The Rise and Fall of the Near-Unipolar World.

[1] The Chinese like to strategize with pithy slogans. As far as they can go, ‘hide your strength and bide your time’ was better than most.

[2] In multipolar systems on the other hand, there is often disagreement as to which power is the dominant one. This is because states differ along different capabilities. In the classical era (1871-1914), Britain was the dominant maritime power but Germany had the most powerful land army on the continent.

[4] Unfortunately, Russian GDP data is only available from 1948 onwards.