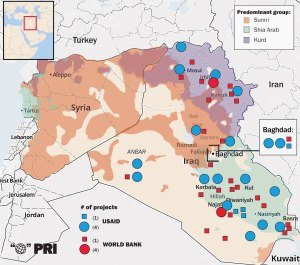 The boundaries of the Islamic State couldn’t be clearer. They are based on a strictly Sunni Arab ethnoreligious identity. The Shia, the Kurds, the Alawi, and others are all enemies in the eyes of the populace of the territory under ISIS’ boot. This region is at the very center of the cauldron of ethnic conflict in the heart of the Middle East, so this is not entirely surprising. The tiger that ISIS is riding is, after all, the deeply-felt opposition among the Sunni Arabs of Syria and Iraq to being ruled from Baghdad and Damascus.

The solution to the ISIS crisis that I had in mind until recently was that the US could coordinate with Damascus, Erbil, Baghdad and Tehran on the ground to conquer the Islamic State and return the territories to the status quo ante circa 2011. By now it is clear that these regional actors are both incapable and unwilling to conquer the Islamic State. The inability comes from a paucity of military wherewithal and the unwillingness from the growing awareness in Tehran, Baghdad, Erbil, and Damascus that even with their combined resources they are simply incapable of pacifying the Sunni Arab region.

The United States cannot defeat the Islamic State without landing an army; as I predicted and has now become clear. A ground invasion could push ISIS back to being a fugitive terrorist group. In the aftermath of a successful military campaign against ISIS, the US could not simply give the pieces back to Damascus and Baghdad. The region would simply revert back to insurrection; perhaps led by a resurgent Islamic State. This in turn means that the United States itself would get sucked into a semi-permanent pacification campaign; in a region where it is deeply hated. Not an attractive proposition.

Clearly, the reason that both regional and world powers are reluctant to take up pacification of the Sunni Arab heartland of Syro-Mesopotamia is Sunni Arab nationalism. It is quite simply the most potent force in the ‘arc of weakness’ that no one wants to talk about. But this pretense is unhelpful. Once it is recognized that a Sunni Arab nation exists inside the Islamic State, more promising strategies of dealing with the problem posed by the Islamic State become available.

Allowing the Islamic State to exist in the heart of the Middle East is not an option. Not only is it a Salafist-Jihadist State, it is a serious long-term threat to the balance of power in the region. There is always the possibility of a repeat of the original Jihad-State’s achievement of conquering the entire Middle East in a generation. The Islamic State ought to dispatched right quick, before it becomes a serious threat to the gulf. Which brings us to the extant Sunni Arab states in the region.

Regional Sunni Arab states, like their Shia counterparts, cannot conquer the Islamic State. One can imagine a US-approved, Saudi-funded, Egyptian army that could conceivably displace the Islamic State. It might be more appetizing to the Sunni Arab populace than an American or Shia force. Yet, the Egyptian army is in no state for such a large-scale operation: Mosul controls a territory larger than that controlled by Damascus and Baghdad. The Saudis, of course, have an incompetent army.

Since regional powers cannot be expected to pull it off and the United States does not allow other world powers military access to the Middle East, it is the United States’ responsibility to figure out how to dispatch the Islamic State.

The ideal solution would be for the United States to move the United Nations Security Council (UNSC). Dispatching ISIS is in the interests of all members of the UNSC. A UNSC ground force would then work to establish a new state for the Sunni Arab people of the territory now under the boot of ISIS.

The restriction of the new State to the territory now under the control of the Islamic State is necessary. The Syrian war is intractable: Trying to solve it opens up a Pandora’s box. The United States cannot wait till the Syrian conflict reaches a decision to destroy the Islamic State. Any attempt to mobilize the UNSC to remove Assad would be vetoed by Russia and opposed on the sidelines by Iran. Assad can keep his rump state but he cannot recover Northern Syria. The Iranians, the Russians, and the UNSC can therefore be persuaded to sign onto a partition of Syria along the Islamic State’s borders.

A unilateral US invasion to dispatch ISIS is not attractive due to political realities in America, Iraq, and Syria. There should thus be no push to extend the new state deeper into Syria. Obviously, if and when a stable polity emerges in Syria, it could be allowed to join the Sunni Arab nation-state if it so desires. Just because Syria cannot be solved does not mean that we have to tolerate the Islamic State.

The strategy outlined here would require some serious diplomacy by the United States. But if successful, it would reestablish US prestige which has been so damaged by recent debacles. And while the strategy proposed here may seem radical, the rationale is already obvious to all capitals.