It took merely the threat of ineffective sanctions from the West to prompt Herr Putin to deepen strategic ties with China. Under a $400 billion gas supply deal between the two great powers, Russia will supply the emerging giant with a trillion cubic metres of gas over thirty years. This marks a strategic realignment in Asia, and will make Washington’s task of containing China considerably more difficult in the decades ahead.

Of the three great powers in China’s strategic neighbourhood, Russia is the only one significantly exposed to Chinese land power. Japan is located off shore and protected by American naval might and nuclear weapons. India stands to lose only its northeastern periphery in the face of Chinese land power—a strategic penetration of India’s heartland again being ruled out by mutual deterrence. By contrast, three-quarters of Russian territory and a third of its population are located west of the Urals—Russia’s Asiatic periphery—and totally exposed to Chinese land power. When China becomes as strong as the United States, even an alliance with all the other great powers would not be able to protect Russian interests in Central Asia, Mongolia, and Siberia. 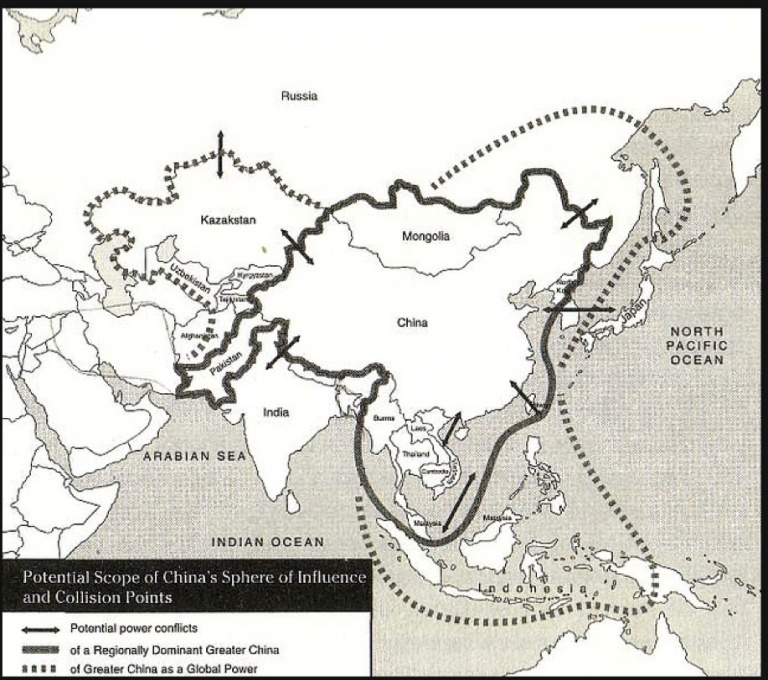 To put it bluntly, bandwagoning with China is Russia’s only viable option. This was probably going to happen sooner or later. The fact that it is happening now is the result of the Washington’s ham-handed response to the Ukrainian crisis. Imagine Washington’s response to Mexico becoming China’s junior geopolitical ally. And unlike the non-existent threat to the United States from the south, Russia has been repeatedly invaded from the west. Extending Nato all the way to the Russian border may have seemed like a good idea to proponents of American primacy when Russian power hit its nadir in the 1990s. With the Putin restoration, Russia has resumed its role as the dominant land power in Eurasia. Now, it only serves to sour Western relations with Russia, thereby pushing Russia prematurely into Chinese arms.

Alongside Russia, the Obama White House risks losing India as well. As the invitation extended to the leaders of India’s neighbours to attend his swearing in ceremony demonstrates, Mr. Modi has sound strategic instincts. He intends to preside over a decade of rapid modernization. Modi’s dream is for India’s great power status to be unambiguous: India ought to become powerful enough to deal with other great powers as equals. This is a tall order. But any significant increase in the war-making capabilities of the Indian state will open up hitherto unavailable strategic possibilities. Sensing Mr. Modi’s disconnect with Washington—which denied him a visa for a decade because he presided over a pogrom—the Chinese are hopeful for a strategic opening. Is a Sino-Indian alliance a real possibility? And even if the Chinese are open to it, does it make sense for India?

India’s geostrategic location is very favourable. It dominates the Indian Ocean and is protected in the north and the east by the Himalayas. If India were to become a naval power of the first rank, it would be in a position to impose naval supremacy on the entire Indian Ocean. It would then control all the sea-lanes between Suez, Singapore, and the Cape of Good Hope; which together account for half the world’s sea-borne commerce and energy. It cannot achieve this without a surrender of US’ global naval primacy. On the other hand, India’s only great power neighbour is China which is considerably stronger than India, and therefore, India’s biggest security concern. Geopolitical realism suggests an alliance with the United States against China. However, bandwagoning with its more powerful neighbour could also be a very attractive option, especially if it expects China to prevail against the United States. If India were to become a revisionist power—a real possibility after Mr. Modi’s election—it could conceivably fight on the Chinese side, with the understanding that once the Americans are kicked out, India and China would divvy up Asia into separate spheres of influence: China preponderant in the Western Pacific and India preponderant west of Singapore.

Such strategic possibilities will only open up if Mr. Modi is successful in catapulting India into great power status. India will not be a polar power—strong enough to decide the outcome of a war between the two most powerful states—so it would be well advised to either sit it out or join the winning coalition. Even so, it would be strong enough to affect the relative probabilities, thereby making it an attractive partner. This means that Mr. Modi has significant leverage against the Chinese and the Americans; leverage he ought to, and will, milk to secure advantageous trade agreements, technology transfers, diplomatic support, and arms deals. As India’s growth rates start climbing, Mr. Modi’s leverage will only increase.

The world is starting to look more and more like the late nineteenth century. That’s great. The policy tensor is bored of unipolarity.