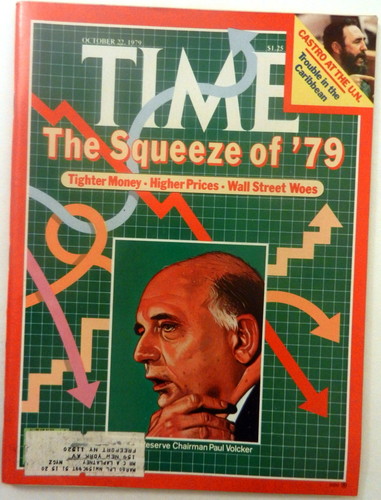 So, I was supposed to write a review of A Brief History of Neoliberalism by David Harvey. I quickly realized that much of Harvey’s argument is taken straight from Capital Resurgent: Roots of the Neoliberal Revolution by Duménil and Lévy. That was not available on the Kindle or my local libraries so I ordered it on Amazon. Waiting for it, I managed to get hold of their recent (2011) book Crisis of Neoliberalism and read it on Saturday. I found Capital resurgent in my mailbox this morning (Monday) and have been going through it. I am yet to finish but I already know I was right to be impatient to read it and also why every single book worth it’s salt on this period of economic history (1970s-present) references this book. I will be posting a proper review later this week but I couldn’t wait to share this insight right away. This book defines what I mean by compulsory reading.

The structural crises of the 1970s

Everyone is aware of the stagflation crises of the advanced Capitalist economies during the 70s. My own understanding was that it was more or less an outcome of the Oil shock. More specifically, I thought that the trebling of the price of oil happened at the time of a cyclical downturn and as the price hikes reverberated through the economy, the macroeconomy moved to an equilibrium with high unemployment and inflation that policymakers did not have the tools to fight. Since the net effect of macroeconomic policy can be either expansionary or contractionary you have to either fight inflation or unemployment. [The Phillips curve shifted upwards.]

But there was another non-cyclical aspect to the crises. This was the structural crises. This began in the late 1960s and continued till the early 1980s. The rate of profit began a steady decline from it’s high of 24% in 1966 to as low as 12% in 1982. Here is a chart from the book (don’t you hate dead tree format already?). The thick line is the US and the dotted line is Germany, France and Britain.

Paul Volker became the Chairman of the Federal Reserve in August 1979. Almost overnight he changed Fed policy and decided to fight inflation by raising interest rates as much as needed no matter what happened to unemployment. Interest rates went up sharply and stayed very high till at least 1986. It immediately led to the deepest post-war recession in 1982. More to the point, this sharp increase in real interest rates rewarded lenders (Finance) at the cost of borrowers (Industry). As a result the profit rate net of interest payments of nonfinancial corporations fell swiftly and stayed low. [The dotted line in the chart below.] 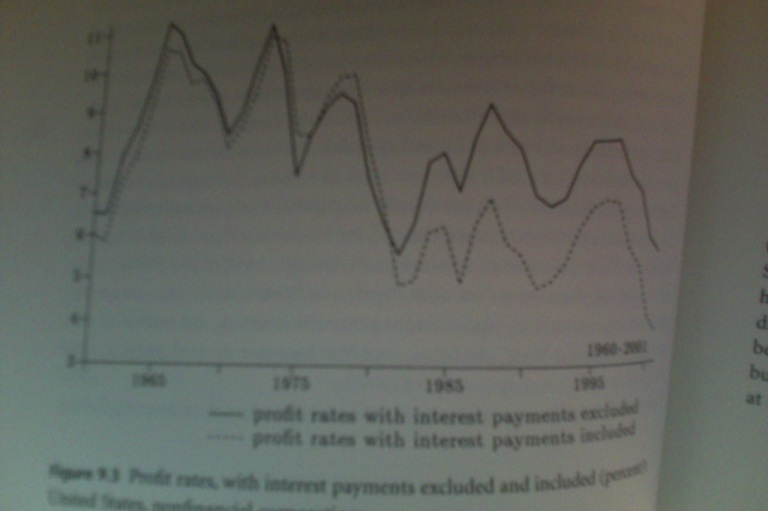 Nonfinancial corporations cut down their now very expensive debt and started paying more and more of their profits as dividends to their investors. The dividends paid out rose from a low of 30% in 1979 to 60% in 1986. Thus, the rate of capital accumulation of nonfinancial firms, i.e. their retained earning which account for a majority of private investment in the economy fell sharply and stayed low. Corporate America entered a period of expensive financing where they had to make very high interest payments and dividends to compensate the holders of capital.

Therefore, even though the (gross) profit rate trended up strongly after the low of 1982, capital accumulation failed to follow suit. Essentially, the holders of financial assets confiscated all the excess profits of the nonfinancial corporations as interests and dividends.

In the words of Duménil and Lévy,

“This confiscation of the effects of the new course of technological change, which underpins the new rise in profitability, appears all the more shocking because governments, through tax policy, and labor, through the fact that its purchasing power practically ceased to increase, contributed very positively to the increase in the profitability of capital. How can it be claimed then that wage restraint and docility in carrying out jobs are the necessary conditions for a decrease in unemployment? These concessions have generally being made–but the benefits went not to labor but to the holders of capital.”

This conversation, is not over.

[Read the next post on this topic: The dominance of finance]