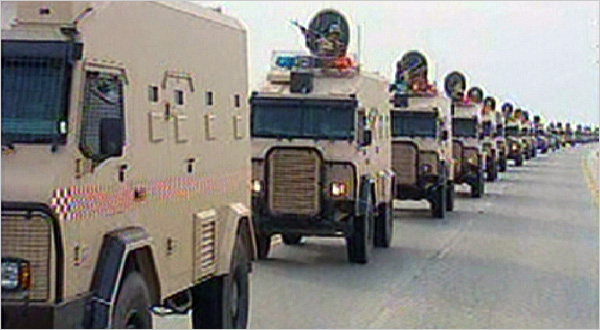 As predicted, the escalating protests in Bahrain prompted Saudi Arabia and the rest of the Gulf Cooperation Council to send troops across the King Fahd Causeway into the tiny island Kingdom that is home to the U.S. Fifth fleet. Its clear that the move was authorized by Washington. What is unclear is whether it was requested by the regime or imposed on it by Saudi Arabia. But that is a second order issue at this point.

For now, the troops seem to have secured key locations, including oil facilities and the headquarters of the regime. Things may get out of hand if there are clashes between the protestors and the troops.

This follows the aborted mass demonstrations that were planned for last Friday in Saudi Arabia. There were reports of some demonstrations in the Shi’ite dominated Eastern cities but Riyadh itself was kept under heavy security presence. Riot police cut access to every major roundabout in the capital city. Protestors are planning for a prolonged agitation.

The United States is hedging its bets on the stability of the petro-dictatorships by calling for restraint and reforms. Not a very effective hedge.

[Update: The situation is escalating. Its too soon to judge whether the Saudi invasion can effectively control the agitation. Things are very fluid at the moment.]