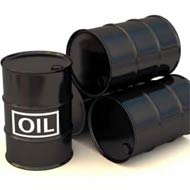 Expectations are running high for the “Day of Rage” in the Kingdom today. According to The Street about 32 thousand people have signed up for the Facebook event. Per Islamic convention, the new day starts when the sun sets, i.e., its already Friday in Saudi Arabia. There have been reports of the police firing on protestors in the eastern city of al-Qatif. Three have been reportedly injured, including one police officer. The Guardian and the Lede blog over at the NYT website are both onto the story.

Crude oil prices jumped a percentage point as news of this event spread through the markets. Meanwhile, Bloomberg is reporting that more than 8,000 call options in New York for $200 a barrel for June delivery have been placed. And the gap between West Texas Intermediate (WTI) and Brent Crude futures has widened to $12.57 at 12:41 p.m. in New York. WTI is the benchmark for US oil supplies and is less affected by imports than the European and North African benchmark, Brent, which is heavily dominated by supplies from the Persian Gulf.

The Financial Times (unfortunately this article is behind a pay wall) is reporting that there has a been a massive surge in the number of call options giving holders the right to buy US crude at $150 by June. There have been reports of a large number of hedge funds betting on an unusually large spike in oil prices.

This is going to be a roller coaster.